Microplastics in the Southern Ocean

The Southern Ocean region south of the Polar Front has a surface area of approximately 22 million km2 and a volume of over 71.8 million km3, representing 5.4% of the world’s oceans. Of increasing concern is pollution in the form of floating macroplastic (i.e. plastic particles ˃5 mm (1), which has impacts through, for example, entanglement and ingestion by marine predators (2, 3) and deposition of beached debris (4, 5). In contrast, microplastic pollution in the Southern Ocean (particles ˂5mm), has received more attention in recent years (6), but there is still a lack of scientific and regulatory work, despite the issue being increasingly recognised globally (see 7 for summary) (Figure 1). 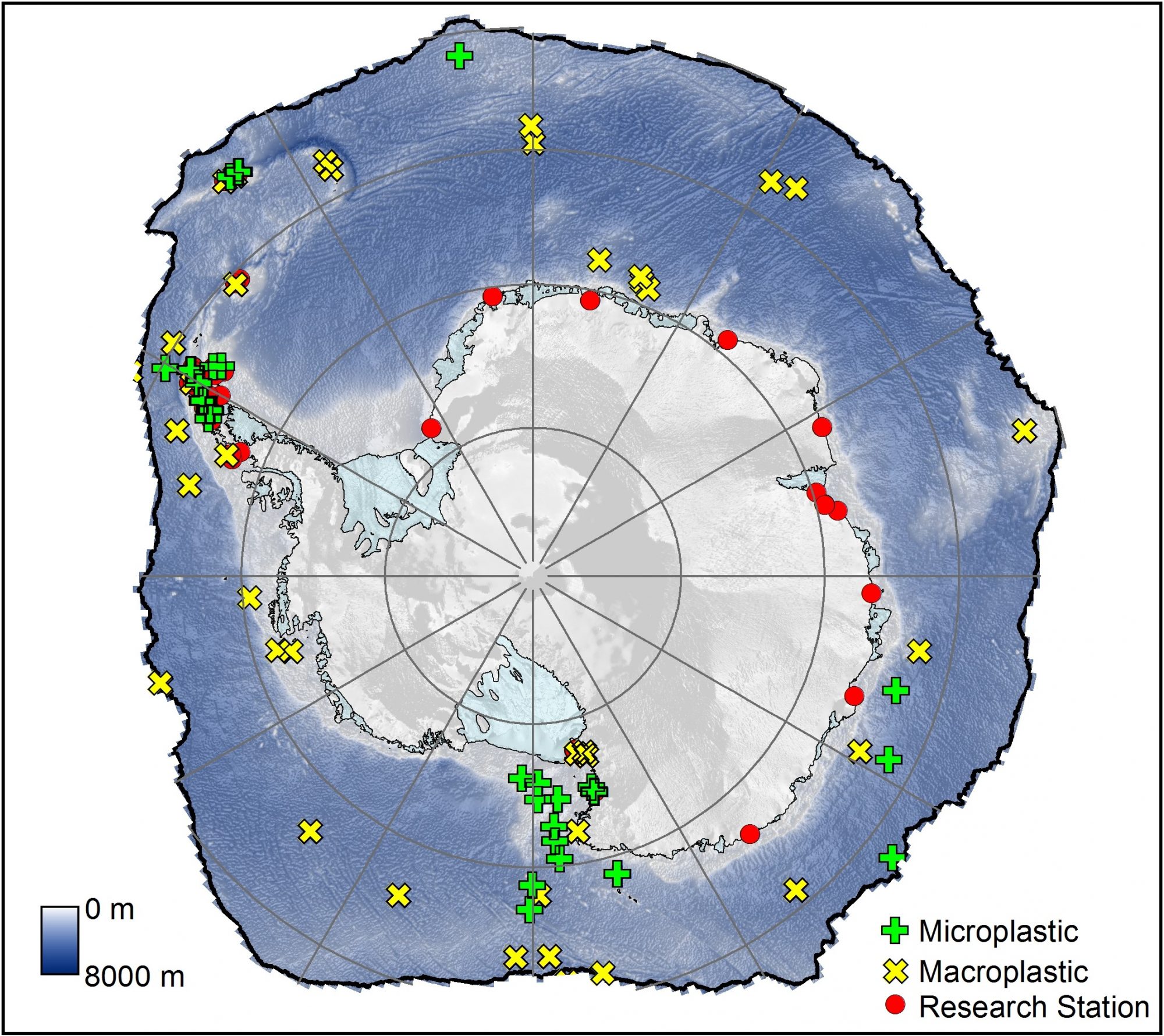 Other than some early work on ingestion by sub-Antarctic nesting seabirds (e.g. 8), there is no published work of the effects of microplastics on Antarctic marine organisms to date. Microplastics have been shown, in both laboratory experiments and field-based studies elsewhere in the world, to affect negatively a range of marine species including pelagic and benthic organisms. Evidence from the northern hemisphere shows that microplastics may impact ecosystems by causing toxicological effects in key species, such as copepods (9) and euphausiids, the group that includes krill (10), at the base of the food chain, as well as potential bioaccumulation and biomagnification of associated toxins such as phthalates with increasing trophic level (11,12,13,14).

Marine microplastic pollution has primary and secondary sources. Primary microplastics can be derived from personal care products (such as toothpastes, shampoos and shower gels) and synthetic fibres from laundry (Figure 2). 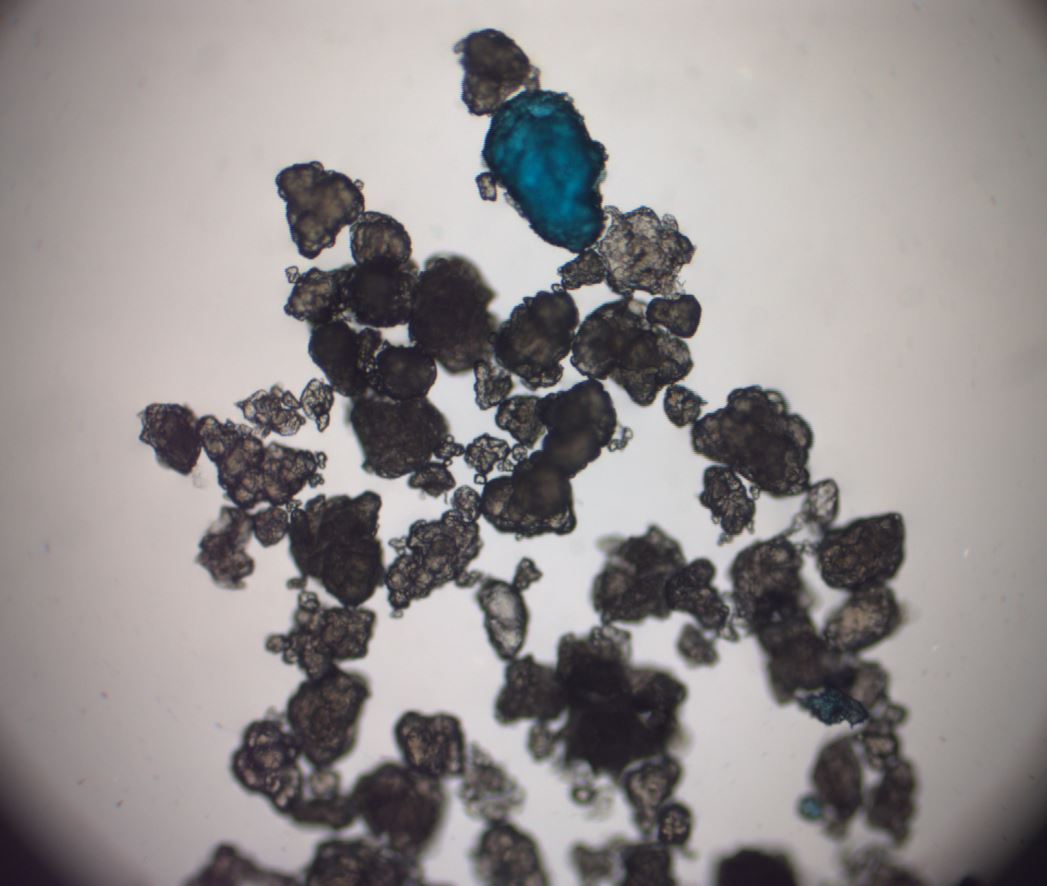 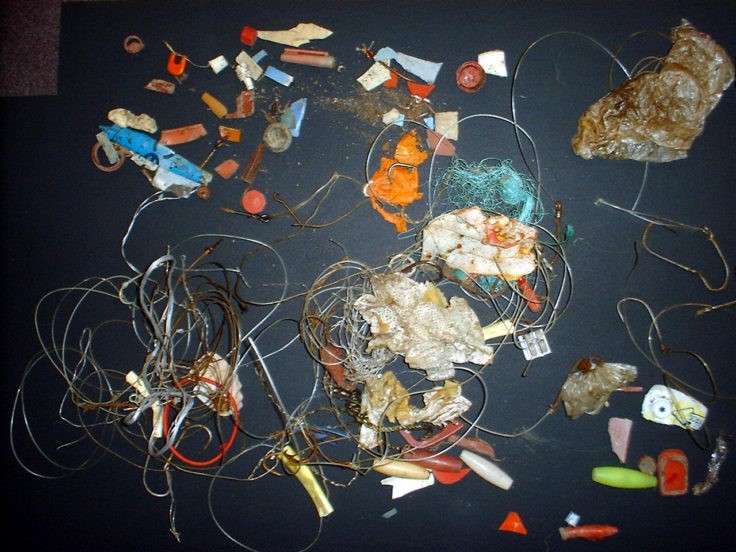 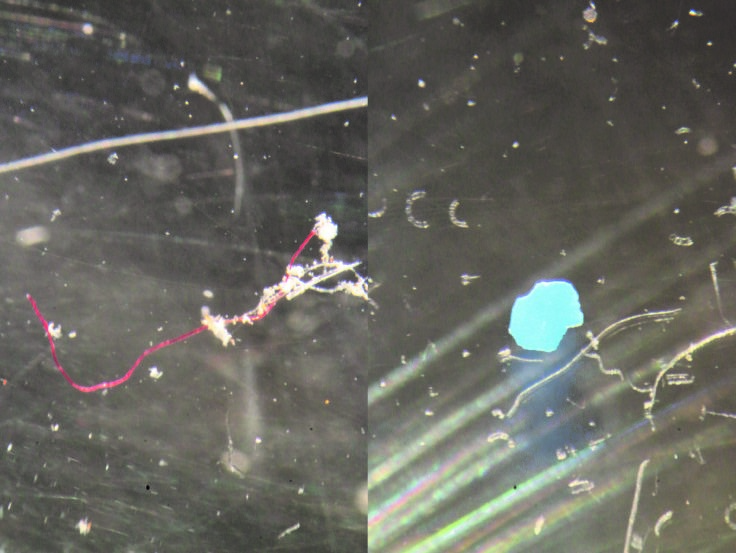 Currently there are no global regulations for the discharge of wastewater (including bathing and laundry grey water), nor is it being actively considered by the International Maritime Organisation. In 1998 the Protocol on Environmental Protection to the Antarctic Treaty entered into force, containing specific annexes on Waste Disposal and Waste Management (Annex III) and Prevention of Marine Pollution (Annex IV), but Parties are not compelled to treat wastewater released from their scientific research stations. Currently there is no routine monitoring of microplastics in Antarctic waters.

Waller et al. (7) estimated a maximum potential input of between c. 44-500 kg of microplastic particles from personal care products and 0.5-25.5 billion plastic fibres from laundry entering the Southern Ocean per decade. However, there are to date few reports of the presence of microplastics in the Southern Ocean, and the methods for sampling and reporting are not yet either consistent or comparable. Microplastic particles have been found in intertidal sediments from a sub-Antarctic island (1), in deep sea sediments in the Weddell Sea (16), in the surface waters of the Pacific sector of the Southern Ocean (17,18), and in shallow sediments and macroalgae at sites on King George Island in proximity to scientific research stations (7).

Although not in the peer-reviewed literature, a citizen science environmental project recently found microplastics in surface waters of the Southern Ocean at levels that are consistent with those recorded in more populated areas of the world (19). The citizen science organisation Adventure Science, reported remarkably high mean values of 22 particles L-1 in seawater samples taken from the western Antarctic Peninsula, with a maximum concentration of 117 particles L-1. The Tara Expeditions Foundation found microplastics in each of four of their samples collected in the Southern Ocean, with a concentration of 0.55-56.58 g km-2 for microplastic particles (20). Cózar et al. found concentrations of 0.100-0.514 g km-2 at all sample stations south of the Polar Front (21) and Isobe et al. (18) found values ranging from 46,000-99,000 particles km-2 at sample locations south of latitude 60oS. A study by Cincinelli et al. found higher concentrations of microplastics in coastal regions of the Ross Sea (up to 1.8 particles m-3) compared to offshore samples, the majority of which were fragments (17). Munari et al. report the presence of plastics in sediment samples from Terra Nova Bay with a total of 1661 items of debris (3.14 g) recorded with fibres being the most frequent type detected (22).

Microplastics generated within the region from macroplastic degradation, or those transferred into the Southern Ocean across the Polar Front, have yet to be adequately quantified, but both may be major contributors, as found elsewhere in the world. As units and methods of existing studies are not comparable, a quantitative and robust estimate of macro and microplastic concentrations around the Southern Oceans is impossible at present. To understand the sources and scale of this pollution an internationally coordinated effort is needed with standardised or comparable sampling, extraction and identification techniques for microplastics and observation and recording methodologies for macroplastics to map and evaluate circumpolar plastics distribution.

Plastic debris reported on the Antarctic continent in 1984, CCAMLR agrees to monitor stranded litter in Antarctica with baseline established in 1994.

Reports that plastic items comprise 73% of anthropogenic debris on beaches at islands in the Southern Ocean with ingested microplastics in the stomachs of at least some individuals of most Southern Ocean petrels and storm petrels; 92% of Blue Petrels Halobaena caerulea contain plastic (28). Microplastics found in the stomachs of prions Pachyptila spp. stranded on New Zealand beaches dating back to 1960.

Systematic annual survey of marine mammal entanglements commences in the sub-Antarctic, that for beached debris in 1990, followed in 1993 by annual surveys of marine debris associated with seabirds at the same location.

Report of secondary ingestion of microplastics by fur seals Arctocephalus spp. at Macquarie Island during the 1990s.

Report of microplastics from intertidal sediments from the sub-Antarctic.

Reports of microplastics (fibres and particles) in the surface waters of the Pacific sector of the Southern Ocean,  in shallow sediments and macroalgae at sites on King George Island close to scientific research stations and from shallow sediments (<140m) in Terra Nova Bay. 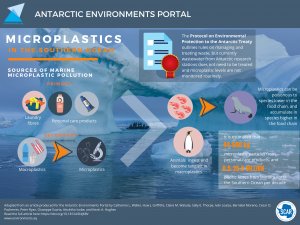