A new publication on trends and future projections of Antarctic Sea Ice has just been published on the Portal.

Since reliable and continuous satellite records began in 1979, there have been strong regionally- and seasonally-varying patterns of change and variability in sea-ice extent around Antarctica (Fig. 1) – in contrast to a largely uniform loss of sea ice across the Arctic. Notably, the region west of the Antarctic Peninsula to the eastern Ross Sea has experienced significant sea ice loss in concert with a strengthening of the Amundsen Sea Low and increased warm northerly winds. On the western Peninsula, the sea ice loss and associated regional warming has led to dramatic and complex ecosystem change (see Antarctic Sea Ice #2) and has also been implicated in major ice-shelf disintegration events on the Peninsula (see Antarctic Sea Ice #1). Elsewhere, sea-ice coverage has expanded but with substantial interannual variability. The sum of these differing regional and seasonal contributions is a slight increasing trend in overall sea-ice coverage of 1.0 ± 0.5% per decade (or about 11,300 km2 per year) for 1979–2018 (Fig. 1a).

Since 2012, sea ice in the Antarctic has undergone rapid and unanticipated swings in its net overall coverage, to first record high (2013-2015) then record low (2016-2022) coverage. Determining the drivers and effects of these abrupt shifts, together with differing seasonal and regional contributions, is a major focus of current research. This represents a substantial challenge given the complex processes involved in ice-ocean-atmosphere interactions and feedbacks. But better understanding of these interactions and feedbacks is crucial to improving the representation and simulation of sea-ice coverage and seasonality in climate and Earth System models. This is pivotal to improving near-term forecasting and long-term projections of Antarctic sea ice and the effects of sea ice change on the coupled climate-ocean-biosphere system in the coming decades. 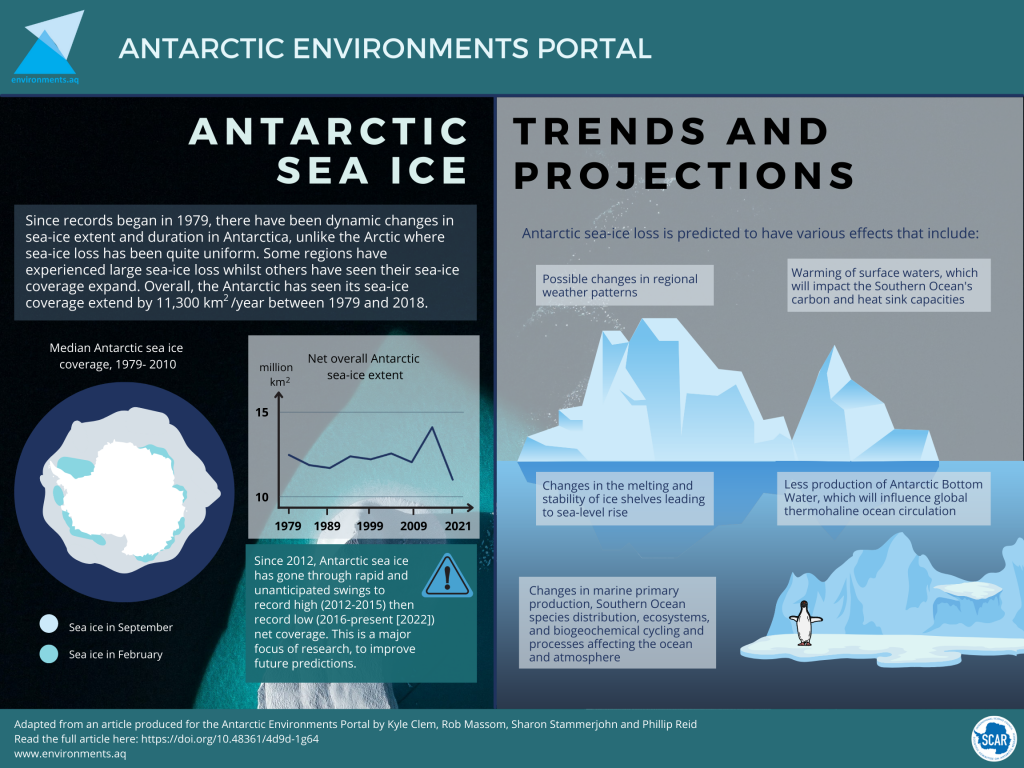