Geothermal environments in Antarctica have profound ecological and scientific value. They are single points of heat and moisture in an icy and dry landscape, and provide habitats for diverse living organisms, some of which are found nowhere else on Earth. They may have provided refuges through repeated glacial cycles for diverse moss and invertebrate communities, crucially stabilizing populations in non-geothermal sites over long time periods. The unique features of these sites render them easily impacted, with physical damage and foreign biological contamination being the principal concerns. To address the need to manage activities that impact terrestrial geothermal environments in Antarctica, a Code of Conduct has been developed by SCAR and endorsed by Antarctic Treaty Parties. 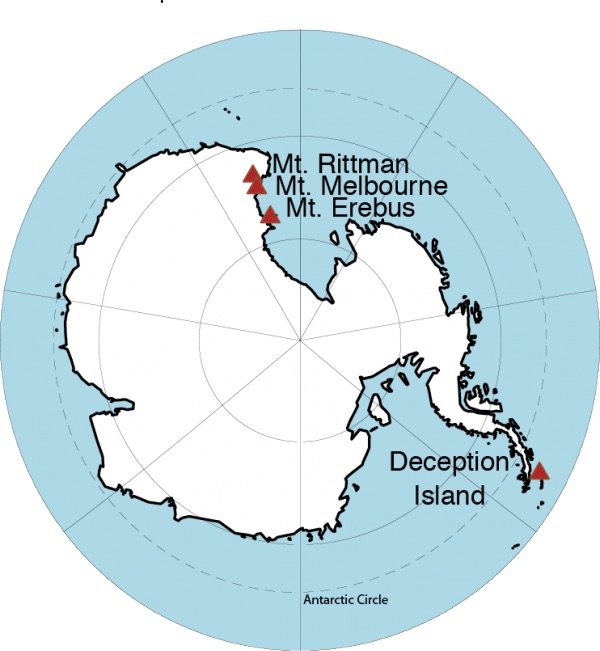 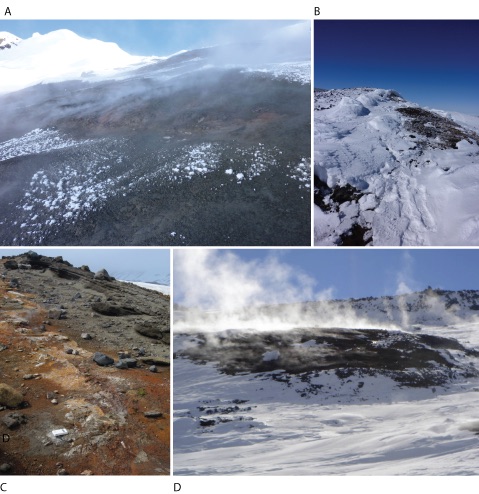 At these Antarctic sites, subsurface geothermal activity heats air and water that escapes at the surface as carbon dioxide-rich steam, often reshaping overlying snow and ice into ice caves, ice hummocks and ice chimneys [7]. Light can be absent deep within these dark oligotrophic volcanic environments and chemical energy powers the ecosystem [8,9].  Gases in many of these environments contain up to 3% CO2 (in contrast to 0.04% in the atmosphere) and high humidity [10], but lack methane  and hydrogen sulphide [11]. If the heat is high, overlying ice may be melted away, leaving areas of warm, ice-free ground, punctuated by steaming fumaroles. There, moss, algae and cyanobacteria develop complex, spatially structured ecosystems [6,12,13,14,15,16].

Early studies suggested that primarily endemic microbial species lived in Antarctic geothermal environments [12,17]. Improved molecular techniques have since revealed that both endemic and cosmopolitan microbes live in highly structured communities corresponding to temperature and soil chemistry patterns [8,9,16,18]. The presence of cosmopolitan soil-associated microbes in some geothermal environments, such as Tramway Ridge on Mt. Erebus (ASPA 175), is best explained by natural atmospheric transport. Geothermal environments may provide a persistent propagule bank for organisms that can then repopulate cold, ice-free areas between glacial maxima, stabilizing diverse populations over geological time [19].

Microbes in ice-free geothermal areas form fragile soil crusts and mats [12,13] that can be easily damaged physically. It is also clear that human activities have introduced non-native organisms to Antarctic environments, including some geothermally-influenced locations [8,20].  To maintain the intrinsic and scientific value of geothermal environments it is essential to keep them as pristine as possible. Introduction of non-native organisms undermines their status as natural laboratories. In the best case, newly introduced organisms are added to the existing community. In the worst case, endemic organisms are replaced. In either scenario, the community is forever altered.

Internationally recognized protocols exist for one Antarctic Specially Managed Area (ASMA 4 Deception Island), two Antarctic Specially Protected Areas (ASPA 140 and ASPA 175) with an interim Code of Conduct for the geothermal ice caves on Mount Erebus. The Deception Island ASMA has Codes of Conduct and Biosecurity guidelines, with terrestrial geothermal sites designated as ASPA sub-areas. At Tramway Ridge, Mount Erebus and the summit of Mt Melbourne (ASPA 175) visitors entering the Area must wear sterilized protective gear, sampling is highly controlled and all equipment must also be sterilized. In addition, areas within the ASPA are designated as prohibited zones, where all access is strictly prohibited until such time it is agreed internationally that access should be granted.

However, some geothermal areas currently have no formal protection, such as Warren Cave on Mt. Erebus. Historically, researchers have not been required to practice sterile techniques within this ice cave. The detection of widely-distributed fungi associated with human and animal skin in Warren Cave, suggests that these sites have now been contaminated by human activities [8].

To manage human activities, a Code of Conduct for Activities within Terrestrial Geothermal Environments in Antarctica has recently been developed by SCAR for application within the Antarctic Treaty area. It aims to establish principles and provide practical guidance on field procedures to help maintain the unique environmental and scientific values of terrestrial geothermal sites. 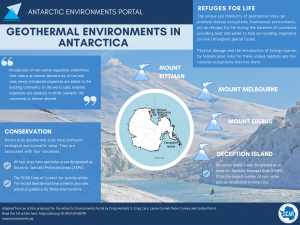