Marine Noise in the Southern Ocean

Marine noise is a form of ocean pollution that may affect fauna ranging from tiny zooplankton to enormous whales. It may interfere with their acoustic sensing of the ocean environment and communication; disrupt behaviour and displace animals; unbalance energy demand and uptake; in extreme cases, cause injury and trauma; and ultimately impact health and survival. The Southern Ocean is not immune to marine noise and its impacts; however, very few studies on bioacoustic impacts have been undertaken on Antarctic species in the Southern Ocean. Here, we present an overview of sources of marine noise in the Southern Ocean, its potential impacts, mitigation options, as well as management and research needs.

Sources of marine noise in the Southern Ocean

The ocean is not a quiet place. It harbours a myriad of sounds that originate not only within the ocean, but also above and below it—radiating into the ocean. Natural, abiotic sound sources include wind blowing over the open ocean and over ice; precipitation onto the sea or sea ice; breaking waves; subsea volcanoes, earthquakes, and landslides; and ice break-up. Biotic sound sources include snapping shrimp, chorusing fishes, whistling dolphins, clicking toothed whales, and singing seals and baleen whales.

The sources and levels of underwater sound vary with location, time of day, season, and acoustic frequency. Underwater sound around Antarctica has great spatio-temporal variability, due to the seasonal changes in ice. Ice cover can attenuate sound between a few hertz and 500 Hz, but also add sound into this frequency band, in particular along the ice edge. Ice sound can be both tonal (rubbing icebergs) and pulsed (ice cracking). Wind blowing over the open ocean and over thin ice generates continuous, broadband underwater sound from a few tens of hertz to 20 kHz. Marine megafauna emit single calls (lasting a few seconds), sounds arranged into song (lasting from hours to days), and choruses (when so many calls and/or song overlap that the ambient sound spectrum is raised in the corresponding frequency band). Vocalising megafauna include Antarctic blue whales (Balaenoptera musculus intermedia; 18-27 Hz), fin whales (Balaenoptera physalus; 15-30 Hz and 90-100 Hz), Antarctic minke whales (Balaenoptera bonaerensis; 100-300 Hz), Weddell (Leptonychotes weddelli; 100 Hz – 15 kHz) and leopard seals (Hydrurga leptonyx; 50 Hz – 6 kHz)1, 2. The whales are present during the austral summer, the seals year-round.

In recent decades, the Southern Ocean has increasingly been subjected to anthropogenic noise from cruise ships, research vessels, fishing vessels, sonars, seismic airguns, and the occasional construction of research stations and wharfs. Not all Antarctic regions have been affected equally. Rather, the South Pacific coast of Antarctica (between the Ross Sea and the Antarctic Peninsula) is the most visited3. Ship traffic has steadily increased in recent years, even though there are no international shipping routes through the Southern Ocean. The presence of tourist vessels (measured in ship-days) is more than double that of fishing vessels, and triple that of research vessels in recent years. The number of tourist vessel voyages tripled from 1999 to 2019 and continues to increase (see data summaries in 3). Research vessel activity has also been increasing, while fishing activity has remained more constant. Tourist vessels are limited to the austral summer, and this is also the peak season for research vessels and service vessels (i.e., icebreakers servicing research stations). Fishing vessels are present throughout the year, outside of pack-ice hence at lower latitude in the winter.

Ship noise is due to propeller cavitation as well as engine and machinery tones that transmit into the water through the hull. The noise is broadband (10 Hz-20 kHz) and continuous. Icebreakers further generate noise when breaking ice. Seismic research vessels tow an array of airguns that repeatedly release high-pressured air into the water, creating a series of sharp acoustic pulses (5 Hz – 20 kHz, every 5-20 s). Marine seismic surveys are used to study the Earth’s crust, its structure and geology. All ships are equipped with echosounders for navigational purposes that emit an acoustic ping (>10 kHz) every few seconds3. The received level depends on a number of factors, such as the bathymetry (shallow, sloping, or deep), seafloor geology, temperature and salinity profiles in the water column, the depth at which the receiver is located, and, of course, the range to the source4. In the right conditions, the sound of a ship may propagate over hundreds of kilometres5 and seismic surveys have been recorded at thousands of kilometres range6. Sound in the Southern Ocean may propagate over long ranges (hundreds-thousands of kilometres7, 8) as the cold surface waters create a surface duct, while the deep bathymetry prevents the loss of acoustic energy at low frequencies. Therefore, Antarctic marine noise may impact marine fauna far away from the sound source (Figure 1). 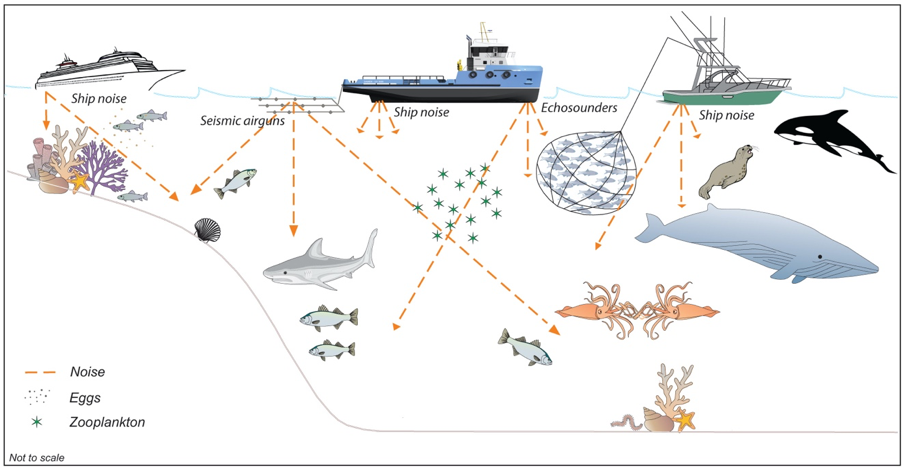 Figure 1. Conceptual diagram showing common anthropogenic underwater noise sources and some of the Antarctic fauna that may be impacted. The orange arrows indicate wave vectors pointing in the possible directions of sound propagation. The diagram is not comprehensive; nor does it include magnitude or impact type.

Impacts of noise on marine fauna

Underwater noise can affect marine fauna in various ways, from acute to chronic impacts to both the behaviour and the physiology of animals. In extreme cases, intense noise sources such as large seismic arrays or underwater explosions can cause immediate injury or even mortality, especially to smaller planktonic animals [9]. Other acute impacts include hearing loss, sudden behavioural changes, and stress, which may or may not be consequential for the animal’s health.

Noise-induced hearing loss can be either temporary (i.e., temporary threshold shift, TTS) or permanent (i.e., permanent threshold shift, PTS). Given the importance of sound to many marine animals, hearing impairment might affect acoustic communication, navigation, foraging, reproduction, and other life functions. A captive harbour seal (Phoca vitulina) was documented to experience an 8-dB PTS (not recovered after >10 years) after exposure to 4-kHz noise at 181 dB re 1 µPa and 199 dB re 1 µPa2s, resembling military sonar at close range10. Acute noise exposure may result in either TTS or PTS, depending on the level of exposure. PTS may also occur after chronic exposure to lower-level noise.

Chronic effects may be more important for the overall health of animal populations. Chronic noise can cause displacement from important habitat. Displacement is often disregarded under the assumption that animals could simply move to quieter regions, but animals choose habitats for specific reasons and there may not be suitable alternatives. From fishes to whales, species seasonally return to critical habitat such as feeding and breeding grounds. Some migratory whales consume a significant part of their yearly food intake while on their Antarctic feeding grounds11, yet the time window for feeding here is very limited (~3 months). Large-scale seismic surveys, lasting for weeks to months, have been shown to displace animals such as fin whales in the North Atlantic; however, they returned after the seismic survey ended12.

Noise can also affect acoustic behaviour (i.e., the production and use of sounds). Increases in chronic low-frequency noise from shipping likely resulted in the long-term upwards shift of right whale (Eubalaena sp.) vocalisations13. Bowhead whales (Balaena mysticetus; an Arctic species) increased both their vocalisation rate and source level in increasing noise from wind and seismic surveys14; however, a threshold was reached, beyond which both methods of vocal compensation started to fail, resulting in decreased vocalisation rate and decreased communication space.

Finally, sea urchins (Arbacia lixula15), fishes (e.g., Nile tilapia, Oreochromis niloticus16), and whales have been shown to be susceptible to noise-induced stress. Levels of glucocorticoid stress hormones dropped in right whales during a period of reduced shipping noise17. While temporary increases in stress hormones are not detrimental (they induce a fight-or-flight response to escape the threat), prolonged elevated levels can compromise immune and reproductive functions.

There is currently very little understanding of noise in the context of other non-acoustic stressors (e.g., chemical pollution or prey depletion), including if noise may contribute to synergistic interactions (i.e., the effects of two or more stressors are greater than the sum of their individual effects). Animals may be more susceptible to acoustic stress in the presence of other stressors. Multiple stressors may lead to a tipping point at which noise impacts may then be observed; this may be particularly applicable to thermal stress18, to which many Antarctic species may be increasingly vulnerable19.

Table 1: Examples of noise impacts on marine species occurring in the Southern Ocean (* or similar, non-Antarctic species). This table does not include studies showing no impacts.

Options for mitigation of impacts 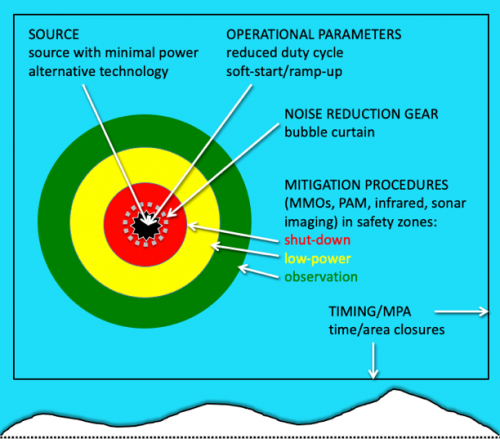 Reducing the likelihood and severity of impact requires a reduction in noise exposure. This may be achieved by alternative technology (e.g., smaller seismic airgun arrays or airgun alternatives such as seismic vibrators, or quieter vessels), sound source modifications (e.g., reducing power, frequency range, or other signal characteristics), operational modifications (e.g., reducing duty cycle or ramping up as a form of alert to animals), or noise reduction installations (e.g., bubble curtains around pile driving for wharf construction). In situ, real-time animal presence surveying (e.g., marine mammal observers onboard, drones with cameras, or towed-array passive acoustic localisation and tracking) may inform on-site management such as temporarily reducing power or shut-down if animals are nearby. Pre-survey planning may consider time/area closures avoiding critical habitats and seasons (Fig. 2).

There is little information on the impacts of noise on species in Antarctic waters (Table 1), and so inferences have to be made from similar and related species elsewhere. The validity of such extrapolations is unknown, given differences in ambient noise, sound propagation, and ecologies. A recent workshop on noise impacts on Antarctic marine mammals identified a need for better information on animal abundance and distribution, and on animal hearing abilities, as well as an assessment of the effectiveness of mitigation methods3. While Antarctic ambient noise has been well monitored in some areas, baseline measurements are needed in others1. Baseline soundscape measurements are particularly important as climate change is resulting in considerable changes in the sea ice extent, glacier melt, and iceberg calving—all of which affect the soundscape. In terms of noise impacts, while short-term impacts on individuals of various species have been well studied, our understanding of cumulative and multiple stressors, and in particular, population and ecosystem effects is almost non-existent.

Noise management requires an interdisciplinary approach, combining an understanding of a) physics and engineering (i.e., noise generation, technical modification options, and noise measurement and monitoring methods), b) geoscience (i.e., environmental parameters that affect sound propagation and the design of monitoring and mitigation programs), and c) biology and ecology (i.e., the animal receivers, their distribution, behaviour, and susceptibility to noise impacts; Fig. 3;34. Standards are needed for the measurement and monitoring of noise and animal responses (e.g., 35). 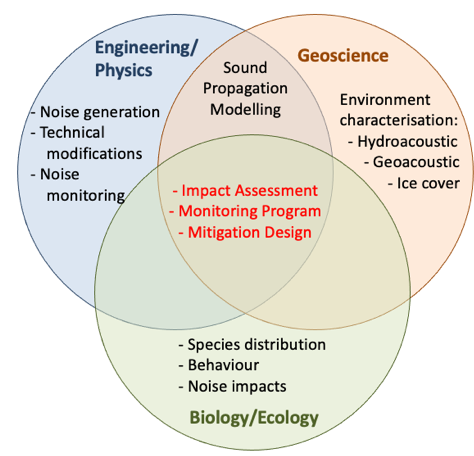 Discovery of Sound in the Sea (DOSITS): https://dosits.org/