Antarctic biodiversity and ecosystems are under threat from introduced non-native species.  Currently the Antarctic Peninsula and off shore islands are the most invaded areas. Invasions are likely to increase, facilitated by climate change and increased human activity in the region.  Despite success in eradication of non-native plants, established non-native invertebrate species have already begun to increase their distribution within Antarctica with largely unknown impacts upon native organisms and habitats.  Further scientific research could usefully investigate surveillance and detection techniques, the rate and extent of microbial and marine introductions, rates of transfer of native and non-native species between Antarctica eco-regions, and devise optimal prevention and ultimately eradication methodologies. 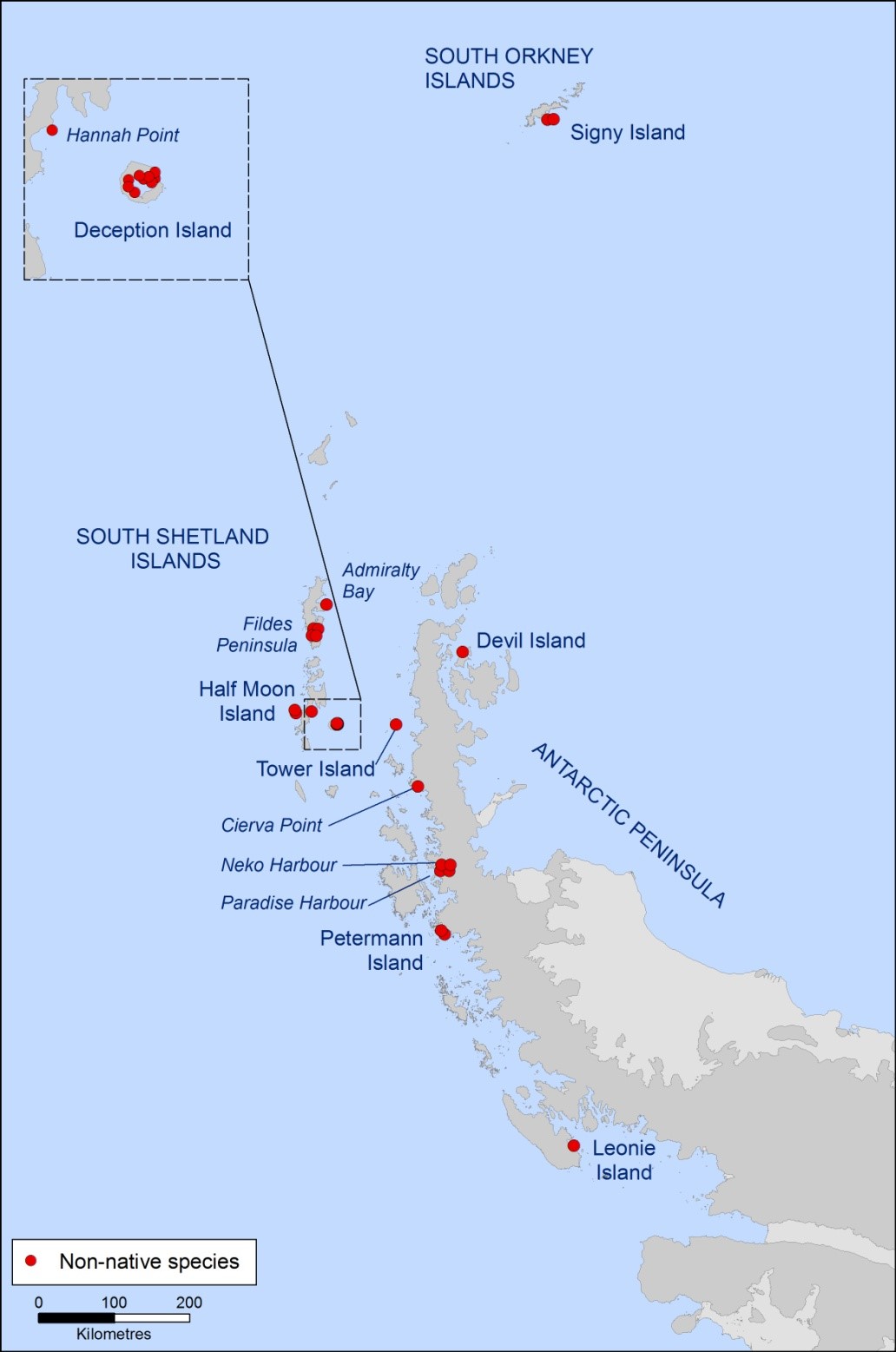 Figure 1. Map of the Antarctic Peninsula region showing the distribution of known non- species, all of which are invertebrates due to earlier eradication of known plant introductions (see Resources for more details). Nevertheless, persistent seedbanks in Antarctic soils may still present a threat even following removal of plants.

Invasive non-native species have caused substantial negative impacts on biodiversity and ecosystem structure and function in many areas of the Earth.  In contrast, Antarctica has relatively few known established terrestrial non-native species, with those reported mostly limited to flowering plants and invertebrates (Figure 1 and 2; 1-3).  Nevertheless, the few monitoring activities that have occurred so far have increased our understanding of the number of non-native species, their distribution and it is apparent some introduced species may remain as yet undiscovered (4).  In Antarctica, non-native species have been found mainly in the vicinity of research stations and visitor landing sites, highlighting that their presence, establishment and increase in abundance are facilitated by human activities (5,6). Most known Antarctic non-native species have been found within the Antarctic Peninsula region but some have been reported from other areas of Antarctica (Figure 1; 1,3).  This distribution correlates strongly with areas predicted to be at greatest risk of non-native species introductions due to high levels of national operator and tourist visitation and favourable climatic conditions (5).  For example, Deception Island (South Shetland Islands) is one of the most frequently visited locations in Antarctica, and also the most invaded, with nine non-native invertebrate species recorded (3,5,7,8). 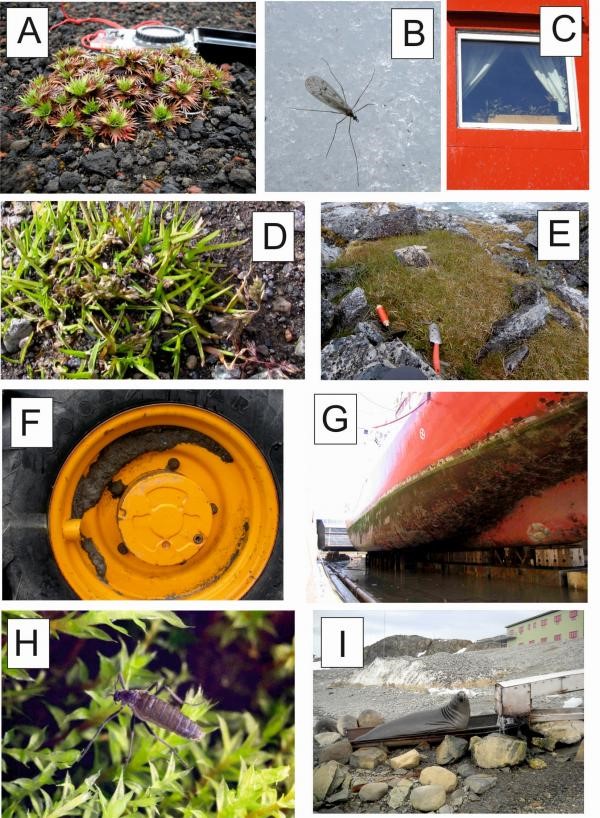 Since the Environmental Protocol was agreed, most non-native species have been introduced unintentionally through importation of cargo, fresh foods, clothing and personal effects (1,2,5,9,10).  Genetic studies of the non-native Poa annua (annual bluegrass) from King George Island (South Shetland Islands) revealed that it was introduced on multiple occasions, from both European and South American sources (11). Some non-native species have colonised Antarctic station buildings and hydroponic facilities (1,12), for example, insects persist in some station sewage systems, despite eradication attempts, and may disperse to establish in the local environment (3,7).

Climate change and expanding human footprint put the whole of Antarctica at increased risk of invasion (5,13).  Climate change may increase availability of ice-free ground, make environmental conditions more favourable for new introductions and increase the likelihood that established non-native populations will increase their distribution and capacity to compete with native species (2,4,13,14).  Human movement between Antarctic regions may transfer existing non-native species to other Antarctic areas (4).  For example, research has shown that a flightless midge (Eretmoptera murphyi), accidentally introduced to Signy Island, South Orkney Islands, could survive and complete its life cycle c. 750 km further south on the Antarctic Peninsula (15).  Human activities may potentially also transfer native Antarctic species to areas within Antarctica where they are not found naturally, which could disrupt established ecosystems and lead to homogenization of the biota (2).

The biology of some invasive species enables them to survive under a wide range of environmental conditions, which may facilitate a rapid increase in their Antarctic distribution (1,5,15,16).  Among vascular plants, Poa annua is highly invasive in many other parts of the world and has the potential to become invasive in Antarctica (1,4,6,13).  Poa annua was reported from six locations on the Peninsula and South Shetland Islands, with the successful removal of populations at all sites, although seeds and other propagules may still remain (4,6,17).  On King George Island, it spread from its initial introduction site around a research station into the local ecosystem (4,17).  The variety of reproductive strategies available to this species as well as its wide climatic tolerance range may explain, in part, its colonisation success (16).  Soil disturbance can increase the abundance and germination of  P. annua, but not native plants (6) and P. annua can have negative effects on native plant species (4).  Poa pratensis was expanding at the expense of local vascular plants and bryophytes prior to its eradication, and its dense root system had a substantial impact on soil invertebrate densities (16).

For micro-invertebrates, Hypogastrura viatica is the most widely dispersed non-native springtail (Collembola) in Antarctica having been found at five locations on the Antarctic Peninsula, including popular visitor sites (3,8).  With a preference for disturbed ground, the species may out-compete native species (8).  First reported on Deception Island in 1949, it is now found there in densities of over 5,500 individuals per litre of soil with unknown impacts on native species.

Regarding insects, on Signy Island, larvae of the midge Eretmoptera murphyi may be able to cycle soil nutrients up to nine times faster than native invertebrate populations and, if dispersed, could alter terrestrial habitats across the Peninsula (15). This species is expanding locally at a slow rate, but it is confined to Signy Island. In contrasts, the fly Trichocera maculipennis has rapidly colonised the sewage treatment plants of multiple stations on King George Island, although it ability to reproduce in the natural environment has not been confirmed (19).

Differentiating between new introductions transported through human activities (non-native species) and those introduced by wind, ocean current or wildlife (natural colonists) can be difficult (7). For example, it was not possible to ascertain categorically if the South American aster Nassauvia magellanica on Deception Island was introduced by human or natural processes (7).  Using the sub-Antarctic islands as model systems for natural species colonisation rates, the likelihood of two new species reaching Antarctica by natural processes and establishing in this time frame is very low.  Correct differentiation is important for subsequent management as non-native species should be eradicated, according to the Protocol (7).  Within the Antarctic Treaty area, several non-native plants have been removed (3,4,7,16) although eradication of remaining propagules remains a longer-term technical challenge. In contrast, no attempts have been made to eradicate non-native invertebrates present in the natural environment, although some have been eradicated from within Antarctic stations and hydroponic facilities (12).

The expansion of non-native invertebrates may be minimized with effective control methods. In the case of Trichocera maculipennis on King George Island, coordinated actions may prevent further dispersal while feasible eradication methods are being explored.

Little is known about levels of non-native species introductions to Antarctic marine environments (1). However, species could be imported in ballast water or on ship hulls (1,20).  Although hull abrasion by sea ice may be effective in removing adhering species, marine organisms may persist within ship sea chests (21), and hull intake ports, increasing the risk of marine introductions (22).

What non-native species have been found in Antarctica to date? This paper reviews available knowledge on possible pathways, impacts and management approaches.

Recommendation III-8  Agreed Measures for the Conservation of Antarctic Fauna and Flora which includes prohibition on bringing into Treaty area and non-indigenous animals or plants except under permit.

Protocol on Environmental Protection to the Antarctic Treaty. Annex II Conservation of Antarctic Fauna and Flora Article 4 re-iterates the prohibition on non-native species

ATCM XXIII – WP 32  Report on outcomes from the Workshop on Diseases of Antarctic Wildlife.

Lewis et al. (20) investigated ships used in support of Antarctic science and tourism and demonstrate that non-native marine species could be transported to the Antarctic on the hulls of such vessels.

Frenot et al. (1) publish a review on: “Biological invasions in the Antarctic: extent, impacts and implications”.

ATCM XXIX – IP 44  Details on how to manage quarantine.

ATCM XXXIV – IP50. Summary of the status of all know non-native species

ATCM XXXV – WP5 . Summary of the outcomes of the IPY Aliens in Antarctica Project provided by SCAR including risk assessment.

Terauds and Lee (23) publish an analysis of the best available biodiversity data, which for the first time allows for the delineation of 15 biologically distinct ice free regions in Antarctica

ATCM XXXIX – IP27.  Report of the risks of introduction of biofouling organisms to Antarctica on vessel hulls.

ATCM XL – IP 128 rev. 1. Report on the Argentine Antarctic Program Operations Manual on prevention of the introduction of non-native species to the Antarctic continent.