The warming of the Southern Ocean and its significance

The Southern Ocean encircles Antarctica and extends north to abut the subtropics at ~30-35°S.  The Southern Ocean is a difficult place to collect measurements because it is far from many major ports, and only a limited number of nations have the research infrastructure and expertise to mount campaigns to the Southern Ocean.  Measurement difficulties are confounded by the fact that the Southern Ocean has some of the stormiest conditions on the planet, it is covered by seasonal and in some places, perennial sea ice, and it contains icebergs.  Expanded observing campaigns since the early 2000s have taken advantage of autonomous measurement systems to show that the Southern Ocean is gaining heat faster than the rest of the global ocean, with detectable heat gain extending from the ocean surface to depths of 1000-2000 m or more.  Warming of the Southern Ocean has implications for the climate system as a whole. This is because the presence of warmer water at the periphery of the Antarctic continent can contribute to ice sheet melt and consequent sea level rise, and also because transfer of heat from the atmosphere to the ocean has long-term consequences for ocean circulation and for the climate system as a whole.

The Southern Ocean is the expanse of ocean that encircles the Antarctic continent.  It encompasses ice-covered regions near Antarctica as well as open-ocean regions south of ~30 or 35°S. Southern Ocean properties are difficult to measure comprehensively because of the region’s vast size, remoteness from major ports, ice cover and persistently stormy weather.  It experiences some of the strongest winds in the global ocean, with wind speeds routinely exceeding 10 m/s, as well as frigid sea surface temperatures, around 0ºC near the [Nowlin and Klinck, 1986; Meredith et al, 2019].

Despite the central role that the Southern Ocean plays in the climate system, historic observations of the region are sparse and seasonally biased to summer, which hinders evaluation of long-term temperature change in the region.  The development of autonomous measurement systems as part of the World Ocean Circulation Experiment in the 1990s provided the first consistent year-round temperature observations of Southern Ocean temperature [Davis et al, 1992; Gille, 2002].

Since the early 2000s, a network of instruments known as Argo floats has measured temperature within the top 2000 m of the global ocean, including the Southern Ocean.  Argo measurements provide clear evidence that the Southern Ocean has warmed on a year-to-year basis since 2006, gaining more heat than any other sector of the global ocean (Roemmich et al, 2015).  Float data from Argo also provide a baseline reference against which to compare sparse historic observations, offering evidence that the Southern Ocean is warmer now within its top 2000 m than it has been at any previous stage in the instrumental record (Gille, 2008; Böning et al 2008, Giglio and Johnson, 2017; Meredith et al, 2019, Fox-Kemper et al, 2021). Regional ship-based observations from eXpendable Bathythermographs (XBTs) corroborate the Southern Ocean-wide assessments (Sprintall, 2008; Auger et al, 2021).

The observed rate of temperature increase of the Southern Ocean is less than 0.1C per decade.  However, an enormous volume of water is warming.  From 2005-2017, the net energy increase in the top 2000 m of the Southern Ocean (south of 30S) is estimated between 4.2 and 6.2×1021 J/yr and represents between 45% and 62% of global ocean warming in this depth range (Meredith et al, 2019).  This rate of Southern Ocean heat energy gain is equivalent 133–196 TW and vastly exceeds current global human energy usage, which is estimated to be about 20 TW (US Energy Information Agency, 2022).

Warming of the Southern Ocean could be hypothesized to result either from warm ocean currents carrying water from the low latitudes into the Southern Ocean or from heat input across the air-sea interface within the latitude band of the Southern Ocean.  Numerical simulations favor the second hypothesis, attributing the observed warming predominantly to atmospheric inputs to the ocean (Swart et al, 2018).  The role of greenhouse-gas driven warming has been identified as especially important, with a smaller contribution associated with the ozone hole in the stratosphere (Swart et al, 2018; Shi et al, 2018; Irving et al 2019).

An exception to the overall warming of the Southern Ocean occurs in the surface waters near the Antarctic continent, where a slight cooling has systematically been observed, both in satellite measurements (Armour et al 2018) and in regional in situ observations (Sprintall 2008; Auger et al 2021).  This cooling is thought to stem from the intricacies of the wind-forced northward circulation at the surface (Armour et al, 2018) and the impacts of ice melt at high latitudes on surface freshwater concentrations, since freshwater can isolate the surface layer from deeper water (Haumann et al, 2016).

Below the surface layer, waters on the Antarctic continental shelf show evidence of warming, with the details varying with locality and the regional circulation.  The Antarctic Circumpolar Current takes its greatest southward excursion in the southeastern Pacific, bringing warm water into proximity with the Antarctic continent in the Amundsen and Bellingshausen Seas.  These regions are characterized by warming deep and bottom waters, linked to the presence of warmer waters originating from the Antarctic Circumpolar Current (Schmidtko et al 2014).

Southern Ocean warming is greater to the north of the Antarctic Circumpolar Current than it is to the south, possibly in part linked to stronger winds.  This has established an increased density gradient, which has been suspected of strengthening the eastward circulation of the Antarctic Circumpolar Current (Shi et al, 2021) and also to have established conditions that are likely to lead to greater temporal variability of ocean currents (Hogg et al 2015; Meredith et al, 2019). 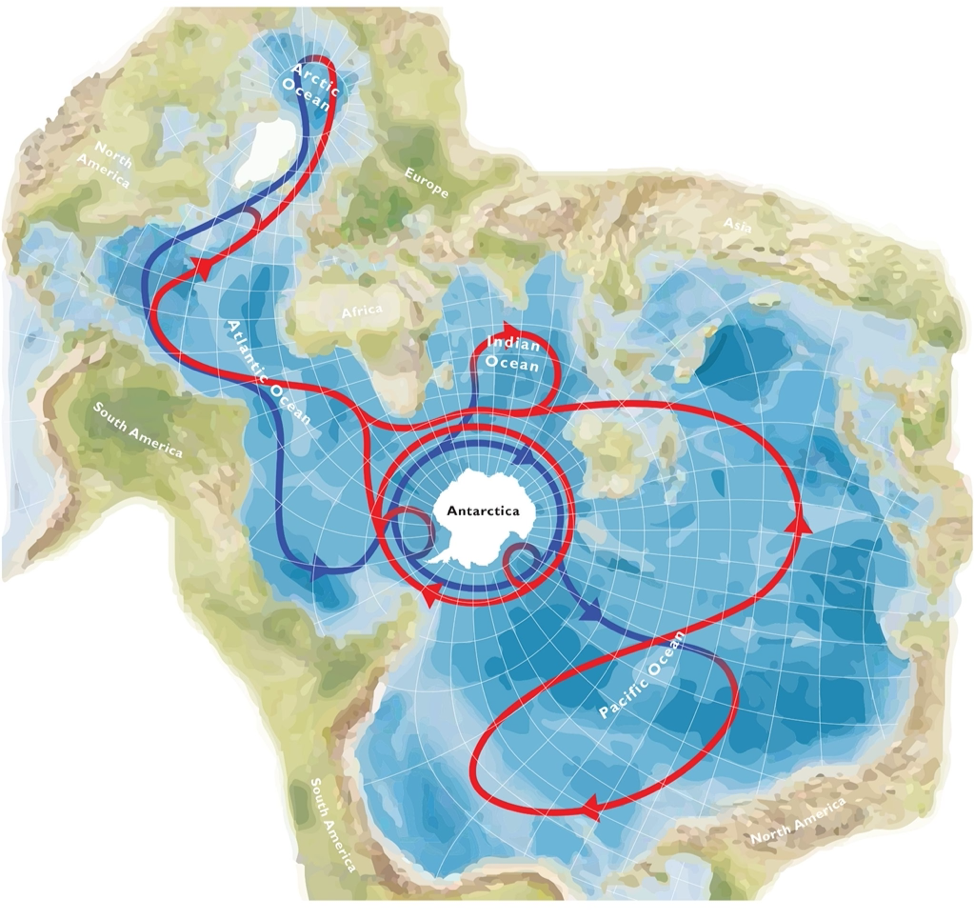 In the first category, characterizing warming requires maintaining observing systems and climate projection capabilities to quantify warming as it occurs and to project likely trends in coming decades.  To maintain an array of approximately 3000-4000 Argo floats, each with a 4–5-year lifetime, requires deploying at least 600-800 new floats each year (Roemmich et al, 2015; Roemmich et al, 2019).  Argo is funded through an international cooperative arrangement, with more than 25 countries contributing to the array.  To place the Argo results in context and to reach areas that are difficult to sample with profiling floats, additional technologies are needed as well, including ship-based observations, satellite measurements, moorings, animal-borne sensors, and gliders that are manoeuvrable within ice-covered regions.  Projections of future change rely on computer-based simulations of climate, that are well informed by observations, and supported through high-performance computing capabilities.  Successful assessment of future warming patterns will depend on continued international investment in observing systems and in computer-based climate projections (Meredith et al, 2019; Fox-Kemper et al, 2021).

First, the appearance of warmer water in the Southern Ocean has the potential to bring warmer water onto the Antarctic continental shelf, where it can come into contact with the ice shelves, which extend outward over the ocean from the land ice on Antarctica.  Since ice shelves float on the ocean, their melting will have minimal direct impact on sea level.  However, ice shelves also have a buttressing effect, helping to prevent ice sheets on the Antarctic continent from sliding into the ocean and raising sea level.  Regions with the greatest continental ice loss (Rignot et al, 2019) coincide with regions with the greatest loss in Antarctic ice shelves (Paolo et al, 2014) and also with regions that appear to have experienced the largest intrusions of warm water near the ice.

Second, the solubility of CO2 in seawater depends on temperature.  Cold water is more able to take up CO2 than warm water.  As surface temperatures warm, the Southern Ocean will have a reduced capacity to take up CO2, potentially making the ocean less of a CO2 sink, accelerating CO2 rise in the atmosphere, and consequently enhancing global warming.  The effect is comparatively modest, but it is of concern because it represents a positive feedback that can accelerate the rate of global warming (Riebesell et al, 2009).

Third, since most warming of the Southern Ocean is driven by the atmosphere, the upper ocean has warmed more quickly than the ocean interior.  A warming surface ocean can result in ice melt, releasing fresh water into the upper ocean.  Both surface warming and the addition of fresh water can increase the density difference between the surface and the deep ocean, inhibiting vertical mixing.  This has the potential to change how the Southern Ocean functions within the climate system, modifying circulation patterns and also making the region less able to absorb heat and CO2 from the atmosphere (Haumann et al 2016; Meredith et al 2019).

Finally, warmer surface waters are associated with changes in the formation and retreat of sea ice and with shifts in wind forcing.  These effects can lead to changes in the vertical mixing of nutrients that have ecosystem impacts, altering krill abundance and changing the feeding grounds for penguins and other megafauna that inhabit the Southern Ocean (Grange and Smith, 2013; Meredith et al, 2019). The reader is referred to Vulnerability of Southern Ocean biota to climate change for more information on Southern Ocean ecosystems.

The Southern Ocean has warmed significantly over the past two to four decades, overall accounting for about half of global ocean warming since 2005.  As described in this review, the warming has potential ramifications for the stability of the Antarctic ice shelves, for sea level rise, for long-term uptake of the CO2 and heat in the ocean, and for ecosystems.  Having the science required to support policy decisions relevant to Antarctic waters and warming impacts will depend on continued availability of observations as well as ongoing research using state-of-the-art numerical models to project the impacts of warming on the full climate system.  The Intergovernmental Panel on Climate Change assessments provide a thorough overview of the key refereed literature and are a good source of further policy-relevant information (Meredith et al, 2019; Fox-Kemper et al, 2021).

References
This site uses cookies to ensure that we give you the best experience on our website.OKPrivacy policy