Most Southern Ocean life is specifically adapted to the unique Antarctic environment. This extensive region is characterized by low temperature, a glaciated coastline and distinct seasonality in sea-ice cover, light regime and biological productivity. Here, we examine the vulnerability of Southern Ocean biota to recent changes to inform society and stakeholders about primary areas of concern and the most pressing fields for future study. Most species inhabiting the Southern Ocean are assumed to be sensitive to climate change. Growth of microalgae, the base of the food web, depends critically on sea-ice cover. Predicted sea-ice reduction will have cascading effects on higher trophic levels. Organisms living in the ice, krill, fish, penguins, seals, and whales will need to find new habitats or feeding grounds. However, thresholds of climatic conditions for population or community collapse are largely unknown. Some organisms might even benefit from climate change through increased reproduction and growth rates.

It is generally agreed that the Southern Ocean contributes to important global ecosystem services. These include oxygen production, carbon dioxide uptake, nutrient recycling, feeding grounds for widely distributed animals such as whales and seabirds, and the provision of biological products for human use. Vulnerability of marine organisms to climate change is therefore crucially important and in this article is defined as their susceptibility to an associated environmental change and lack of capacity to cope and adapt (1, 2). Consequently, the sensitivity of both biological processes and of ecologically important species to climate change is a pressing research subject (Figure 1) (3). Knowledge on these issues is urgently needed to develop effective conservation and ecosystem management strategies. 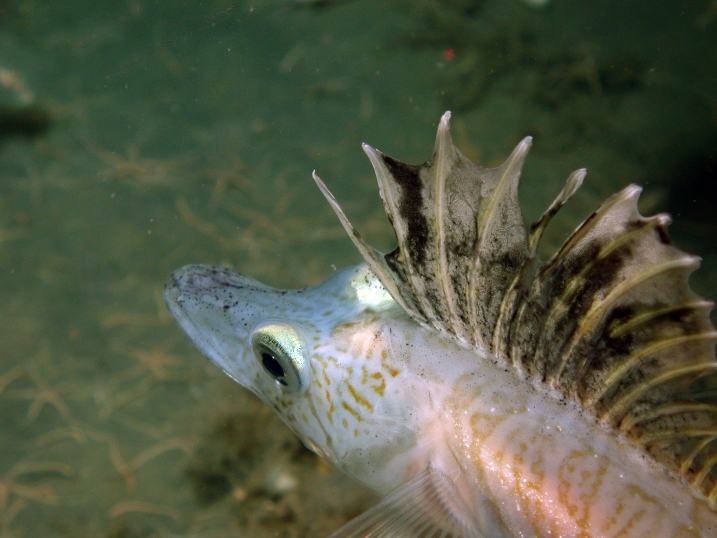 Figure 1: Ice-fish is the group of organism, which is best investigated in terms of their tight adaptation to low temperature, expressed by the development of anti-freeze proteins. Thus, these fishes, represented here by the species Pagetopsis macropterus, are highly vulnerable to temperature increase of their shelf habitats at the sea-surface, by upwelling and expansion of warm water masses. The lack of haemoglobin is another example of how low temperature has affected icefish evolution. Photograph: J. Gutt © AWI/Marum, University of Bremen

Marine algae contribute to the production of oxygen and sequestration of atmospheric CO2 through photosynthesis, while producing organic matter that supports higher levels in the food web. Whilst phytoplankton growth in open water is predicted to increase in areas of sea-ice reduction (and has locally been observed) (4, 5), it also decreases when nutrients are reduced due to consumption and increased water stratification. Shifts in species composition from larger to smaller diatoms and phytoflagellates are driven by changes in sea-ice and ocean dynamics as well as by glacial melt-induced salinity variability (Figure 2) (5, 6). Since phytoplankton is the foundation of the marine food web, such climate sensitive changes can affect the entire marine ecosystem. The complexity and high biological diversity of other Antarctic microbial groups (bacteria, archaea and unicellular animals) pose additional challenges to assessing ecosystem vulnerability to climate change. These organisms are inextricably linked to phytoplankton and play critical roles in ecosystem functioning and interactions (e.g. biogeochemical, symbiosis, predation; 7). 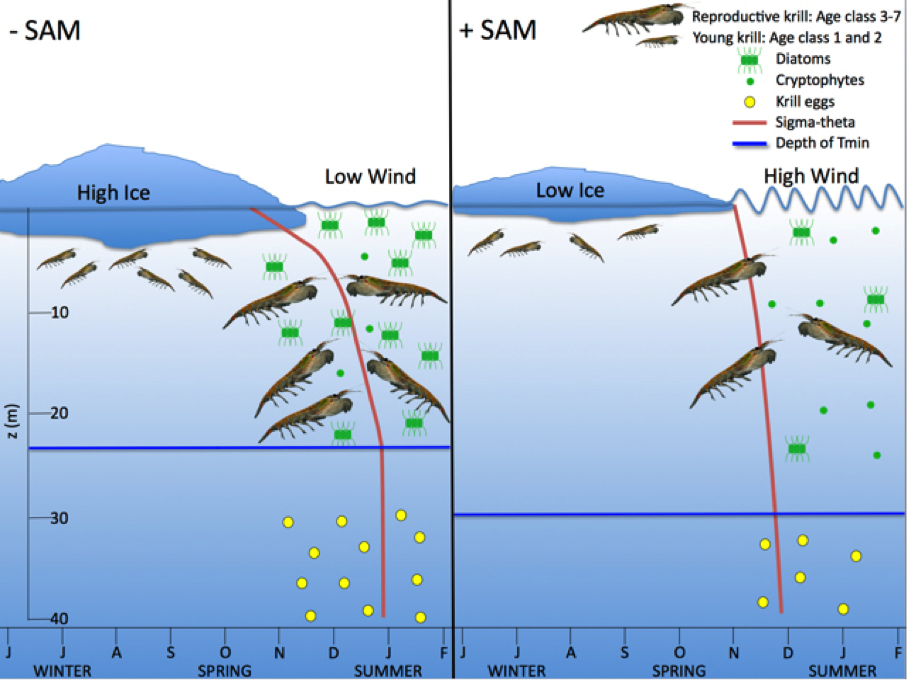 Figure 2: Effects of large-scale climate and local physical forcing on biological processes in the coastal Western Antarctic Peninsula (WAP). Generalized illustration summarizing how winter and spring climate, weather, and physical oceanographic processes, driven in part by phases of the Southern Annular Mode (SAM), cascade from phytoplankton to krill recruitment. Variability in SAM is characterized by the opposing atmospheric pressure anomalies between Antarctica and mid-latitudes and is reflected in the strength of subpolar westerly winds, such that cold southerly winds move across the WAP during a negative SAM (left panel) and warmer northwesterly winds blow over the WAP during a positive SAM (right panel). Diatoms are typically the most abundant type of phytoplankton and favourable food for krill in coastal waters near the WAP. Flagellated cryptophytes can dominate at times in the WAP and, because of their small size, are not fed on efficiently by krill. Temperature minimum (Tmin) is the upper boundary of the cold remnant Winter Water layer in the region. Sigma-theta is the density gradient of seawater between Tmin and the surface - the more curved the line, the larger the density gradient. Phytoplankton, krill, krill eggs, and sigma-theta are generalized for qualitative illustration (more vs less) and do not represent quantitative differences between opposing SAM events. Note: female Euphausia superba spawn over deeper water; this illustration is meant to depict relative egg production. From Saba et al 2014 (6).

Microalgae in the lower layers of sea-ice are typically 1000-times denser than in seawater. They are a rich food source for zooplankton as well as for sea-floor communities (benthos) when ice melts and the microalgae sink towards the sea-bed. In scenarios of sea-ice reduction, many species will see their distribution diminish. Abundant copepod species like Drescheriella glacialis need sea-ice as a breeding or nursery ground (8). Antarctic krill (Euphausia superba) and silverfish (Pleuragramma antarctica) also depend on sea-ice during part of their life cycle. They are dominant species and represent energy-rich trophic links between plankton and top predators. Apparently, recruitment failure in krill and silverfish is a consequence of warming and sea-ice retreat (9, 10). Their local disappearance and partial replacement by energy-poor gelatinous salps at the Antarctic Peninsula provides evidence for their vulnerability and first responses to climate change. The decline of these key species and other sea-ice biota will have cascading effects on higher trophic levels and consequences for long-term ecosystem health.

Zooplankton are a crucial link in the food web because they feed on phytoplankton and microbes and provide food for higher organisms. Increases in water temperature will probably see species adapted to extreme cold decrease in number, (e.g. the ice krill Euphausia cystallorophias) in favour of warm-water tolerant species such as the small copepod Oithona similis. It is predicted that warm-water species will also move southward and may displace cold-water species near the continent, which will be unable to escape any further south. On the other hand, foraminiferans are increasing in number in the short term and in some regions, for complex ecological reasons (11). Ocean acidification poses an additional threat to Antarctic ecosystems. It can affect organism development and physiology not only for species with calcium carbonate shells, e.g. pteropods (sea butterfly snails) but also for krill, resulting in long-term declines in populations. This will affect the entire marine ecosystem and may alter the uptake of atmospheric CO2 by the ocean.

The benthos contributes significantly to the cycling of carbon and nutrients and to the overall marine biodiversity. In laboratory studies, Antarctic benthic invertebrates, especially larger species, are less resistant to warming than temperate species even though they have been observed to survive temperature increases in the range predicted, which are already occurring West of the Antarctic Peninsula (Figure 3) (3, 12, 13). While some species do have a high thermal tolerance, a comprehensive knowledge of response thresholds to environmental change is generally poor. 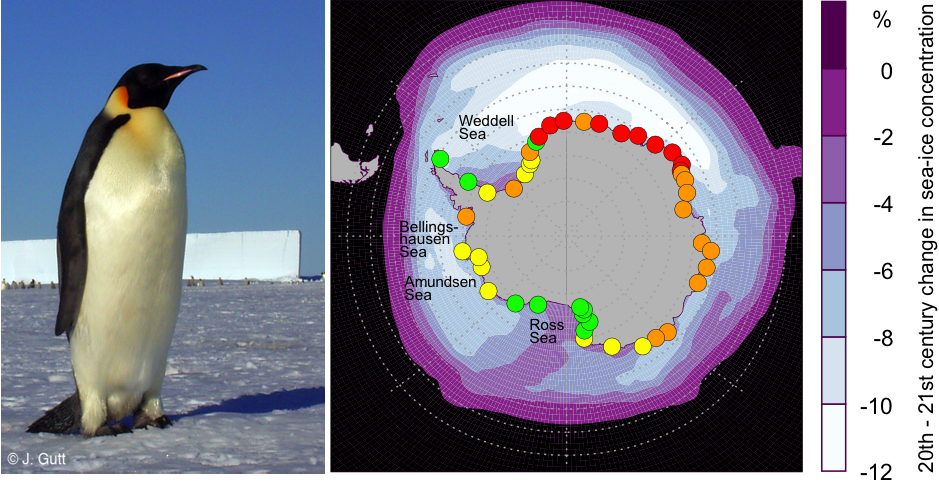 Marine top predators also act as indicators of the status of ecosystems, and they currently indicate an uncertain future. While ice disappearance at the Peninsula has led to an important reduction in populations there, the overall Adélie population is stable, even increasing locally. Yet, there are signs suggesting that the situation may evolve quickly: recent extremes in sea-ice extent, coupled with unusual rainy episodes in East Antarctica led to increased foraging distances and, ultimately, total breeding failure in a supposedly stable zone (14). A continent-wide decline and regional near extinction, is predicted in a modelling approach for the iconic emperor penguin by the end of this century, (Figure 4) (15). Furthermore, altered diving patterns suggest southern elephant seals have to work harder for food within a warming Southern Ocean (16). 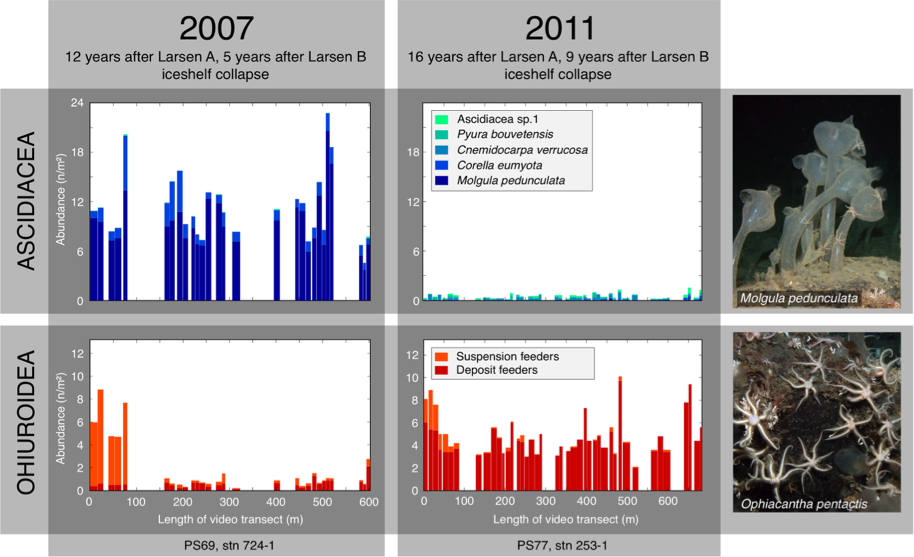 Not only single species, but whole communities can be affected by climate change (17). This happens with increases in iceberg scouring, glacier retreat, and changes in sea-ice cover (18, 19). The entire marine ecosystem is also changed by ice shelf disintegration when an extremely nutrient-poor system shifts to more “normal” Antarctic conditions with intensive growth of microalgae serving as food for consumers in a short summer period (20). As a consequence, benthic organisms like sponges, sea-squirts, and brittle stars, can exhibit unexpectedly fast population growth and high mortality (Figure 5) (20, 21).Generally the vulnerabilities of such systems can give rise to top down cascading effects through the food-web, to competitive or bottom-up forces depending on which types of organisms are affected and how (17). The self-repair capacity (resilience) is not known for many species or communities, though evolutionary processes may result in timely genetic adaptation, especially in microorganisms.

Do we already know enough about the impact of climate change on Southern Ocean biodiversity, ecological processes, and the ecosystem services they provide? No – we need more interdisciplinary and internationally coordinated surveys to monitor key species, their adaptability and the environment that shapes them. Long-term in situ experiments, studies of ecosystem linkages and development of future simulations that include effects of multiple stressors and non-linear biological interactions are needed (19, 22). Finally, such information should provide the basis for a comprehensive assessment of Southern Ocean biota vulnerability, sound conservation measures and effective management actions.

These represent specific projects that significantly contributed to knowledge of the vulnerability of Southern Ocean ecosystems either in a comprehensive way or by providing direct insights that are unique, unexpected or of broader relevance.

Start of physiological studies on the adaptation of Antarctic fish to a narrow temperature window.

Ecological studies on sponges in McMurdo Sound provide the basis for a long-term study on their sensitivity to environmental variability (see 2004/2010).

The international Biological Investigations of Marine Antarctic Systems and Stocks program (BIOMASS) marks a second survey after the Discovery Investigations to assess the environmental sensitivity of krill stocks. https://legacy.bas.ac.uk/bas_research/data/access/esodap/biomass.php

Ecosystem Monitoring Program (CEMP) of the Commission for the Conservation of Antarctic Marine Resources (CCAMLR), among other aims, to determine changes in commercial species due to environmental variability. https://www.ccamlr.org/en/organisation/achievements-and-challenges#CEMP

Era of advanced studies on the structure and functioning of genetic material (“omics”) starts. Such approaches provide new opportunities to investigate adaptation to unique Antarctic conditions and vulnerability of organisms to environmental changes.

A benthos study site in McMurdo Sound is revisited after four decades; unexpected fast recruitment and mortality of sponges is discovered.

A first large-scale survey allows for interpretations on the change of under-ice shelf habitats after climate-induced ice-shelf collapses in the Larsen A and B embayments. Major contribution to the International Polar Year (IPY).

For the first time aspects of polar ecosystem vulnerability are included in the report of the Intergovernmental Panel on Climate Change, IPCC (Fourth Assessment).

The Antarctic Climate and the Environment report (ACCE) including past, present and future developments of Southern Ocean biota is published by SCAR. http://www.scar.org/accegroup/accegroup-publications

A study over 16 years at Potter Cove, King George Island, revealed a high vulnerability of benthic filter feeders to increased sedimentation due to climate-induced glacier melting. It can serve as case study for the impact of further terrestrial deglaciation to near-shore habitats.