Robust evidence highlights major shifts in the abundance and distribution of penguins (Adélie, chinstrap, gentoo, emperor, king, and macaroni) breeding on the Antarctic Peninsula and across the Scotia Arc in FAO statistical SubAreas 48.1 to 48.4. In SubArea 48.1, Adélies and chinstraps have declined throughout most of the western Antarctic Peninsula (WAP) to the north of Marguerite Bay. Adélies are stable or increasing in Marguerite Bay and to the south, and stable or increasing in the eastern Antarctic Peninsula. By contrast, gentoos on the WAP (48.1) and at the South Orkney Islands (48.2) are increasing and expanding their breeding range southwards; elsewhere, their populations are highly variable but not trending significantly. In SubArea 48.3, macaronis have experienced substantial declines while kings have increased. In SubArea 48.4, chinstraps and Adélies are stable. These findings highlight considerable spatial heterogeneity in species trends, and the importance of up to date census data to underpin work to predict and monitor future trends.

There are 18 species of penguin in the world, six of which breed regularly on the Antarctic Peninsula and across the Scotia Sea (Figure 1): Adélie [Pygoscelis adeliae], chinstrap [P. antarctica], gentoo [P. papua], king [Aptenodytes patagonicus], emperor [A. forsteri] and macaroni [Eudyptes chrysolophus]. Populations of penguins in this region have been changing over the past century (e.g., 1-2), with marked declines recorded for many colonies of macaroni, Adélie, and chinstrap penguins. For example, macaroni penguins have declined in SubArea 48.33, and while Adélie and chinstrap penguins are stable or increasing in SubArea 48.1 in Marguerite Bay2, 4, they have declined throughout most of the western Antarctic Peninsula (WAP) to the north of Marguerite Bay2. Adélie penguins are also stable or increasing in the Weddell Sea region, as well as in SubArea 48.44. Gentoo penguins are increasing in abundance on the WAP in 48.1 and at the South Orkney Islands in 48.2 and are expanding their breeding range to the south2; elsewhere in the region, gentoo populations do not appear to be trending significantly4, though large interannual fluctuations in gentoo abundance can complicate trend assessment. King penguins have increased in SubArea 48.3 and appear to be extending their range south to the South Shetland Islands in 48.15, and whilst emperors have now disappeared from the Dion Islands on the WAP6 they continue to breed near Snow Hill Island. These findings highlight considerable spatial heterogeneity in penguin population trends and the importance of comparative work across long-term study sites. 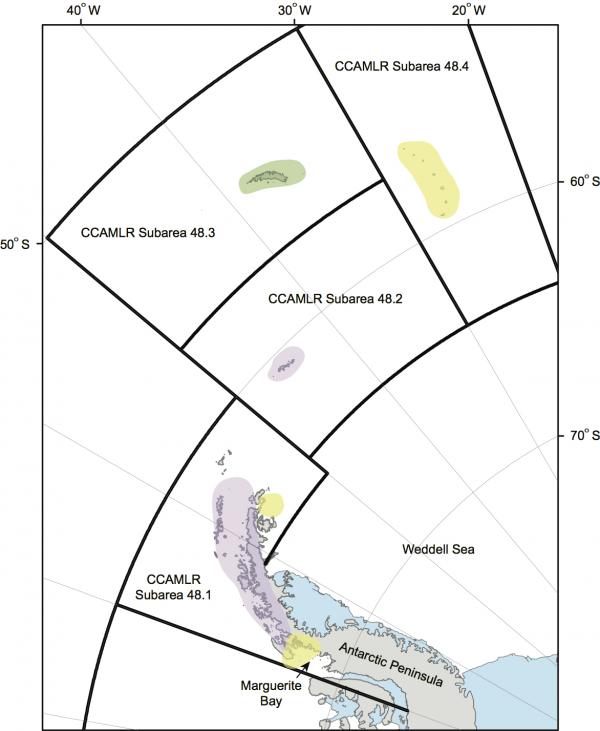 Figure 1: Antarctic Peninsula and Scotia Arc. The pink area represents that portion of the western Antarctic Peninsula where Adélie and chinstrap penguins have declined in abundance and gentoo penguins have increased in abundance; yellow areas represent where Adélies and chinstraps are either stable or increasing in abundance (NB: no chinstraps are found in the Weddell Sea area or in Marguerite Bay). The green shading indicates where macaroni penguins have experienced substantial declines. The FAO statistical SubArea boundaries used by CCAMLR are shown in black.

Up-to-date data are vital for management purposes, including for managing the krill fishery, for understanding the regional impacts of climate change, and for understanding how ecosystems change, given the ongoing recovery of marine mammals. New tools (e.g. 14, 16) are now becoming urgent if managers are to adequately understand penguin population trajectories.

Several hypotheses have been suggested to explain why penguin populations are changing, including: (i) ecosystem changes associated with regional climate change; (ii) population changes as marine mammals recover from historical harvesting; (iii) the commercial fishery for Antarctic krill [Euphausia superba]; and (iv) impacts from tourism.

Environmental variability and change affect penguin population processes either directly through physiological impact, or indirectly via the distribution or availability of their mid-trophic-level prey. On short time scales (days to years), breeding behaviour, as well as breeding success and survivorship rates, can be affected by random events (such as unusual storm events), seasonal variability, or interannual variability in environmental conditions. Over longer periods of time (years to decades), persistent changes can drive shifts in distribution and abundance, which are easily detected by long-term survey programmes2, 17, 18.

The continuing effects of historical sealing, whaling and fishing, make it difficult to determine the influence of climate change per se (19-20). Indeed, it is highly probable that no unifying solution will be found to account for all observed changes in penguin populations. Different drivers of change may be impacting different species and operating at different temporal and spatial scales that range from that of a single colony, to the regional scale, or even to the circumpolar scale. Nevertheless, there is some compelling evidence that indicates climate change can have a direct effect on penguin abundance and distribution. Increased snowfall resulting from increased warm, wet conditions may have contributed towards Adélie population declines close to Palmer Station21, a feature that may also affect populations in the South Shetlands. Colonies that have experienced more snow accumulation have decreased more rapidly than penguin colonies where wind scour abates snow accumulation. Similarly, gentoo penguins breed in areas with <50% sea ice concentration in the austral spring and following the decline in spring sea ice along the WAP, they have expanded their breeding range southward into new areas2.

Disentangling the effects of climate change is complex as it might potentially impact penguins at any or all of their breeding sites, foraging sites, moulting sites or wintering sites. A broader understanding of penguin life-history and their ecological interactions is necessary. Long-term studies of fixed populations have played an essential role in our current understanding of changes whilst opportunistic vessel-based surveys (e.g.4) have provided complementary data on penguin abundance and distribution. New technologies, such as remote sensing imagery14, 16, unmanned-aerial vehicles (UAVs), animal tracking devices (satellite- or light-based geolocators), and automated individual identification systems (radio frequency identification), as well as remote automated camera systems, are now providing important details about abundance, life cycle, demography and distribution on land and at sea (foraging and migration), at local and regional scales. Integration of these disparate data streams, and their analysis alongside complementary datasets on krill abundance (and availability to foraging penguins) and environmental conditions (e.g. sea ice), will be required to predict better the future of penguins along the Antarctic Peninsula. Focused study regions, including reference areas where fishing is restricted, would help reduce the complexity of interacting drivers12.

Publication of SCAR synthesis Antarctic Climate Change and the Environment

Antarctic Climate Change and the Environment (2009)

Antarctic climate change and the environment: an update (2013)