The leopard seal has a circumpolar distribution in the Southern Ocean1, with the highest known densities in the Antarctic Peninsula2. Most leopard seals remain year-round in the Antarctic pack ice3,4 although some animals move north, out of the pack ice, to sub-Antarctic islands5,6,7 or occasionally further north.8 This is a non-breeding partial migration9, where migrants and non-migrants of the same population breed in the pack ice but overwinter at different locations. Most migrants are juveniles, regularly seen at sub-Antarctic islands, with the greatest numbers in September and October.1,10,11 The majority of migrants at sub-Antarctic islands are only observed on the one occasion, and only a few older individuals return multiple times. For these, migratory routes back to the pack ice may change from year to year. Vagrants are sighted in warm temperate latitudes, for example off eastern Australia, in winter months.1  Small resident populations also have been reported in New Zealand12, and Chile.8,13 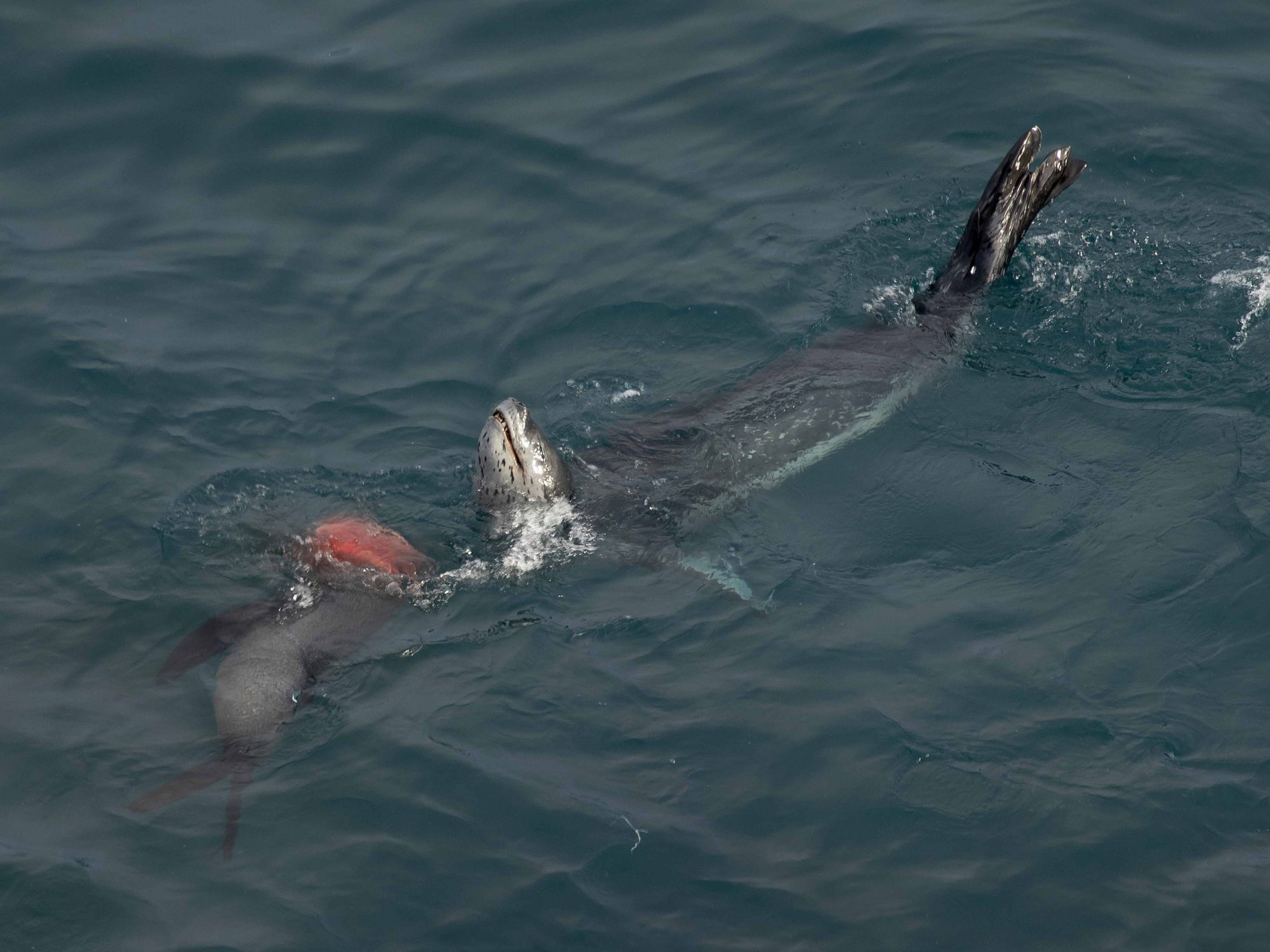 In the austral spring females haul out on the ice floes of the pack ice to give birth. Pups are born from late October to late December.13 The pups are weaned at approximately four weeks old, at which time the females are ready to mate (i.e., they go into oestrous).5 Mating has only been observed in captivity and occurs in the water.1

The leopard seal is the only known Pinniped both to hunt large vertebrate prey and also filter feed to eat small invertebrate prey.1 Leopard seals eat a wide range of different prey types,5,15,16 and their diet may vary based on their sex, body size17 and local food availability.

Leopard seals that hunt large vertebrates, for example other seals,18,19,20,21 penguins17,22 and large fish,17,18 need to break apart these large meals into smaller pieces to swallow.1 This is difficult for a marine predator where the prey cannot be held between flippers and partly why marine mammals feed typically on small prey that is swallowed whole. Leopard seals process large prey at the water’s surface by gripping a carcass with their teeth and thrashing it in an arc to tear smaller pieces away for consumption.1

Leopard seals hunt Antarctic fur seals,17,19 southern elephant seals,21 Weddell seals18 and crabeater seals.18 Young crabeater seals are probably the most frequently attacked, indeed 78% of crabeater seals have parallel scars suggesting escape from a leopard seal attack.23 Young, newly fledged naïve penguins are most vulnerable, but adult birds are taken as well. Birds are ambushed as they transit to and from colonies.22 This includes chinstrap, Adélie, gentoo, king, emperor, rockhopper, and macaroni penguins. They can also prey on flying seabirds of any size, from diving petrels to giant petrels as well as on fish and squid.18,24 Leopard seals also feed on small prey, like Antarctic krill,17,18,24 and use suction and filter feeding when hunting these small prey.25

In the Antarctic Peninsula and sub-Antarctic Islands (e.g., Bird Island), leopard seals may have a significant role in driving population dynamics of their prey species, such as the Antarctic fur seal.17,26,27 Where multiple prey is available, they tend to consume the most abundant prey species, depending on prey availability and seasonality, which in turn relates to the time the individual leopard seals spend at a particular location.27 While leopard seals have been preyed upon by killer whales, such observations are rare.1 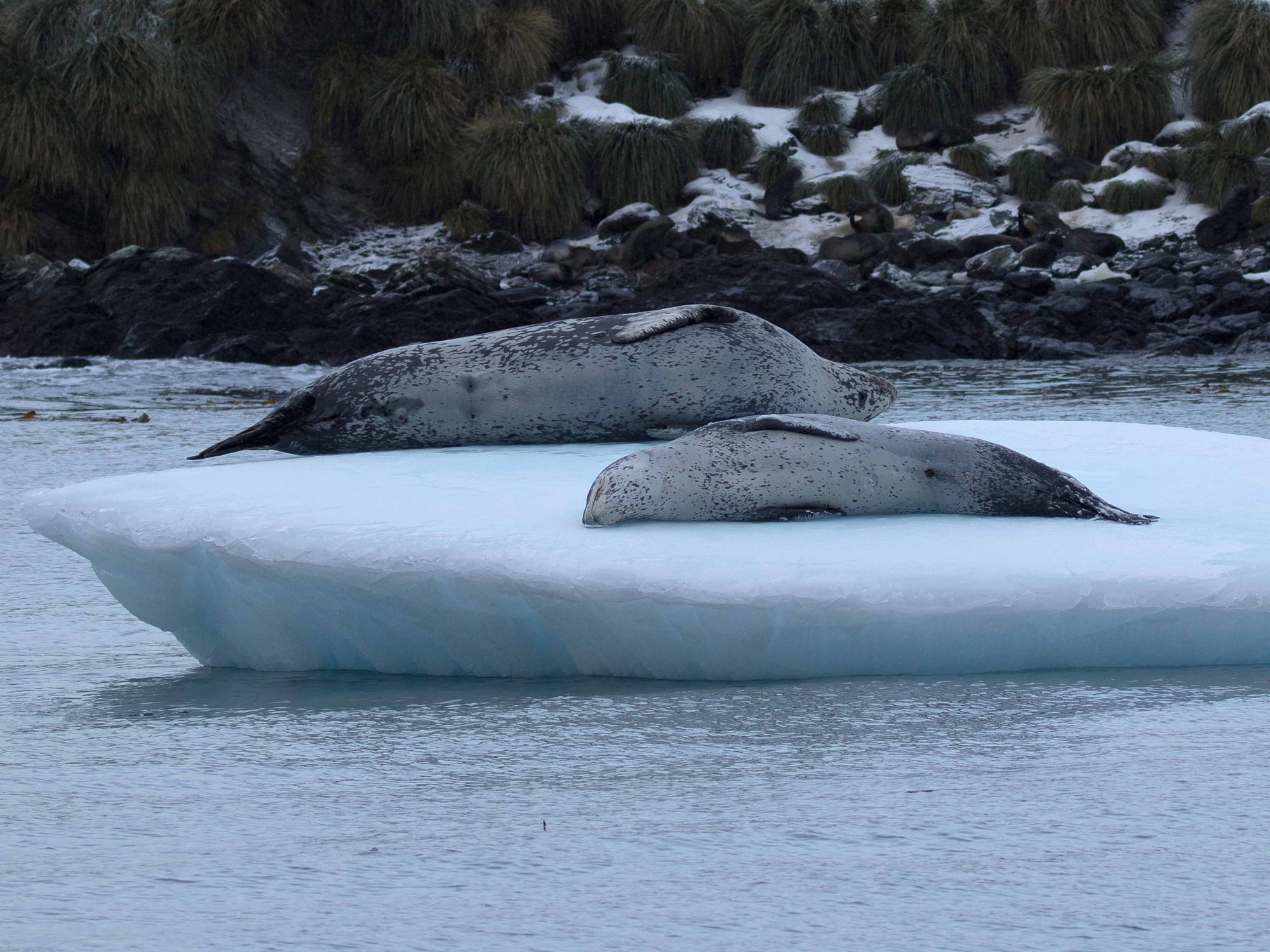 The conservation status of the leopard seal was assessed in 2015 as ‘Least Concern’ under the IUCN Red List Criteria.28 The justification for this classification was: widespread distribution; circumpolar estimate of leopard seal abundance (conducted in 1999/2000) of more than 35,000 individuals; and no indication of population decline. Caution was noted, however, as population estimates are substantial underestimates, with considerable uncertainty, consequently population trends are unknown, further, as leopard seals depend on sea ice for reproduction, they could be adversely affected by a future reduction in sea ice due to continued climate warming4.

Annex II to the Protocol on Environmental Protection to the Antarctic Treaty (1991), provides for the conservation of Antarctic fauna and flora, and prohibits taking or harmful interference with native fauna and flora except in accordance with a permit.  Annex II also provides for the conditions under which permits should be issued which includes scientific research (as per Article 4 of CCAS).

Article 4 of CCAS allows for special permits to be issued for scientific research to take a small number of leopard seals to collect information on life history and ecology that might provide a basis for conservation and management within the framework of the Antarctic Treaty. 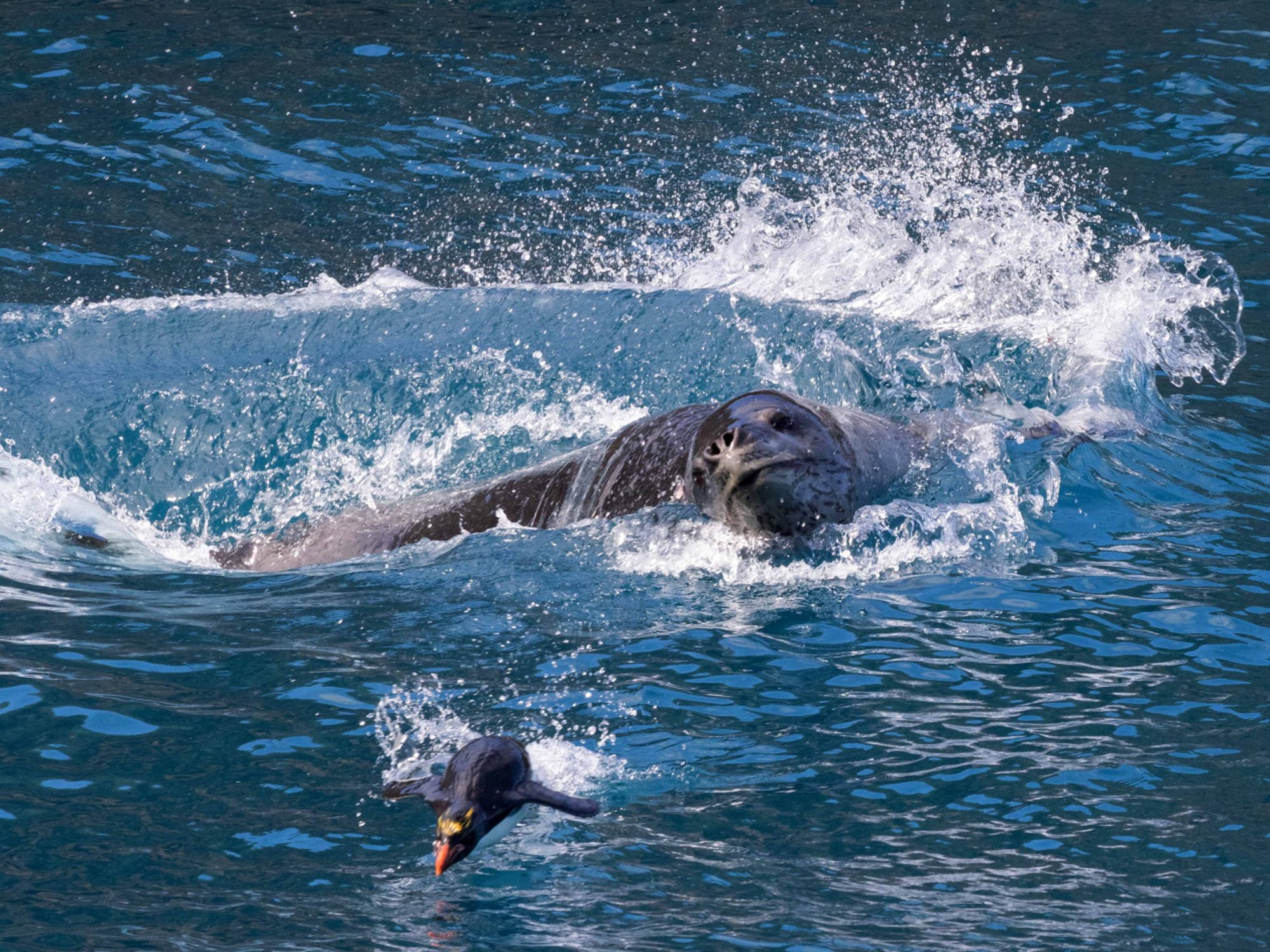 Attacks on humans by leopard seals are rare, and only one event has been fatal.29 In the sea ice in Eastern Antarctica researchers report being ambush-hunted by leopard seals, whereas divers in the Antarctic Peninsula report non-harmful interactions. Leopard seals are reported to be attracted to the vibrations of outboard motors and bite the oars and pontoons of rigid inflatable boats; however, if hunting and territorial behaviours are avoided danger to humans is likely minimal.30

In the western Antarctic Peninsula, the region of highest leopard seal densities, the seals’ sea-ice habitat has decreased by 21–28%.2 Alongside this habitat loss, there has been a decline in krill in the region, and an increase in fishing pressure, which could indirectly reduce leopard seal food.2 These factors may combine to potentially impact the leopard seal.

The high dependence on sea ice as a primary breeding and resting platform makes the leopard seal vulnerable to changes in the sea ice environment. Long-term changes in the seasonal sea ice extent as driven by climate can affect the availability of a proper breeding environment and also affect access to food where Antarctic krill is a main prey for the Antarctic food web. Changes in the sea ice environment also affect the migration timing, the number of migrants and the time that those chose to stay in their temporary non-breeding grounds.31 This in turn may have consequences for the population dynamics of prey consumed.

Circumpolar aerial and shipboard surveys were last conducted in 1999/2000 and at the time were believed to underestimate the true leopard seal population.2,32,33,34 The leopard seal is difficult to study via traditional ship-based visual surveys32,34 due to the fact that when surveys are conducted (in the austral spring/summer) seals sing underwater34,35 and are unavailable to visual surveys.32,34 However, as the leopard seals produce loud36 vocalisations in a regular pattern37 for many hours, passive acoustic monitoring provides a cost-effective method,34 alongside traditional techniques, to identify spatial distribution and habitat use.34 In parallel, small unoccupied aerial systems (a.k.a., drones) can provide accurate, scalable platforms that can greatly increase spatial and temporal survey coverage.38,39,40