The Ross seal is one of four marine carnivores that breed in sea-ice habitats around Antarctica. Ross seals are not often seen because they breed and moult in difficult to reach areas of heavily congested pack ice and then apparently spend the rest of their lives in the open ocean. Consequently, their biology and ecology are poorly known and they have been presumed to be rare. The original reason for declaring the Ross seal a Specially Protected Species was principally because there were too few data to make any judgement about their abundance . The few surveys by icebreaker and aircraft estimated abundance ranging from 20,000 to 220,000. The genetically effective population size of Ross seals in the Antarctic was estimated at around 130,400 from analyses of mitochondrial DNA and about 254,000 from analyses of nuclear DNA microsatellites. Genetic data suggest that the species has been increasing over geological time and there is no evidence for any recent decline in abundance. The species has not been commercially hunted, and very few have been collected for scientific studies.

Ross seals (Ommatophoca rossii; Order Carnivora, Family Phocidae) live exclusively in the Southern Hemisphere (1) and haul out to give birth, mate, and moult on seasonal sea ice. The species was described in 1844 and named after Sir James Clark Ross who collected the two type specimens in 1840 at 68oS and 176oE in the Ross Sea (2). Ross seals have not been seen often as they have long been thought to live in heavy pack ice, where few ships or expeditions can travel. Consequently, their distribution, abundance, life history, and basic natural history are poorly known. Pups are evidently born from mid-October through November, with mating in December and early January (3, 4, 5). Ross seals moult from late December through perhaps mid-February (6, 7, 8). They forage at around 100 to 200m deep and occasionally to 400 m (9, 10, 11, 12). Based on only small samples, maximum longevity is at least 18 to 20 years, males are sexually mature when three to four years old and females when two to seven (1). 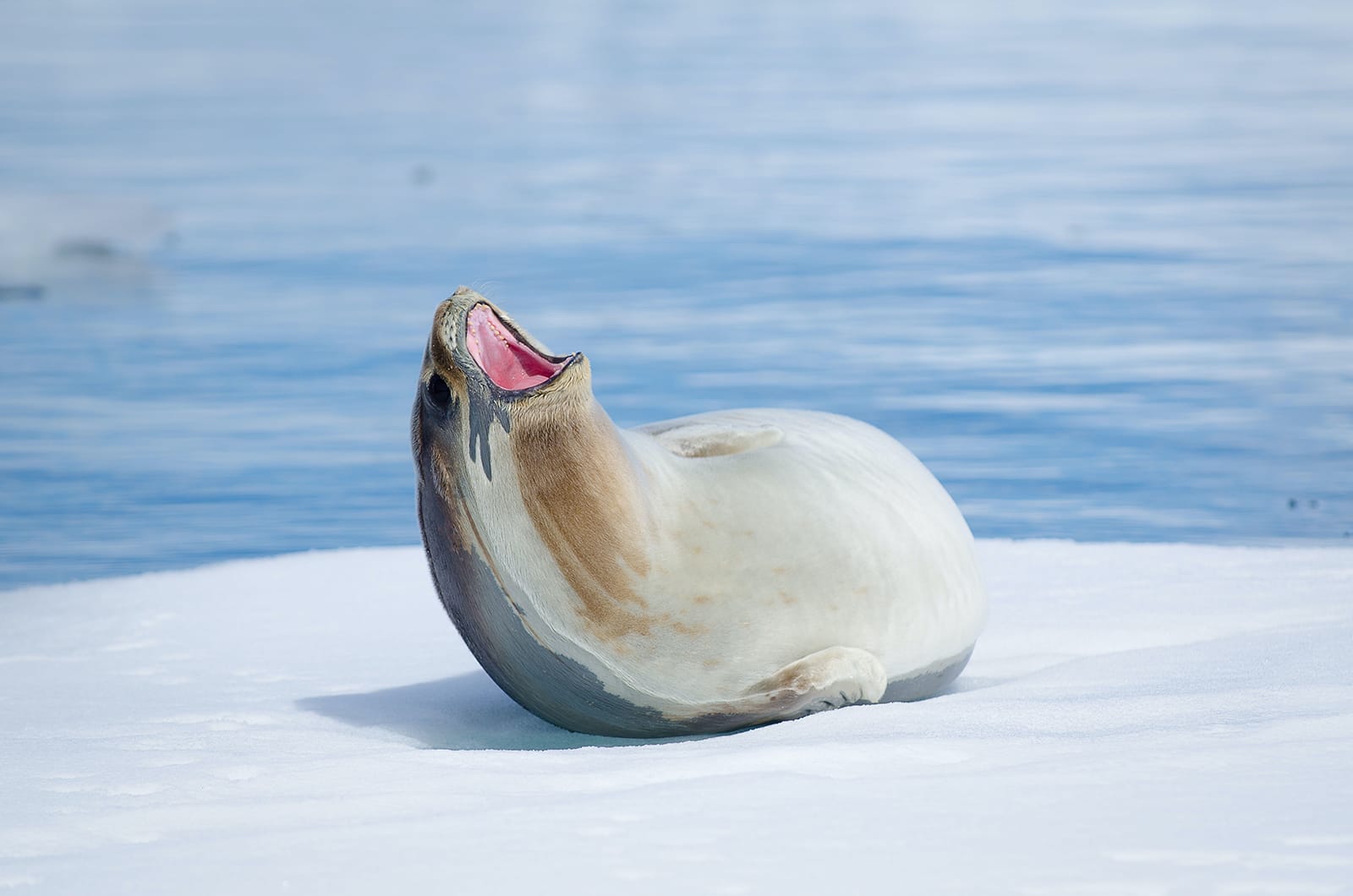 The distribution of Ross seals in austral spring and summer appears to be directly related to the distribution and density of sea ice. Seals evidently breed in interior and high latitude areas of congested pack ice and then haul out to moult in late summer on larger, more stable ice floes near the northern edges of sea ice. Sea ice is an essential substrate for them when breeding and moulting. Recent data suggest that Ross seals mostly live in ice-free habitats during the rest of each year (9, 11, 13) and that non-breeding seals might only occur in sea-ice habitats when moulting. Because surveys of seals in sea-ice habitats have not accounted for substantial numbers that are in ice-free areas (including key sex and age components of the populations), direct counts of seals hauled out on ice are not good indicators of population abundance nor age structure, even when corrected for haulout behavior. As a consequence of the apparently complex seasonal distribution of Ross seals and the difficulty in surveying sea ice habitats, the derived estimates of abundance are likely substantial underestimates of actual abundance of the species.

Systematic counts and estimates of population abundance and density are meagre and variable (14, 15). A few regional surveys and one internationally coordinated, circumpolar survey have been made of populations of phocid seals in Antarctica.  Several regional surveys were made by icebreaker (some with helicopters) and airplanes in the mid to late 20th Century (13, 14, 15), enhanced by opportunistic observations in some areas (16). An internationally coordinated, circumpolar survey was made in summers from 1997 through 2001 (13, 14, 15, 17). Projections of the species abundance throughout the Southern Ocean have ranged roughly from 20,000 to 220,000 based on surveys in sea ice habitats (14, 15, 17) though they did not account for large numbers that were in ice-free areas. Genetically-based estimates of abundance of reproductive females (i.e., genetically effective population size) are around 130,400 based on analyses of mitochondrial DNA (18) and around 254,000 based on analyses of nuclear DNA microsatellites (19). Total species abundance would be substantially larger if immature seals, non-breeding females and adult males were accounted for. Genetic data indicate that there are no genetic differences among populations (20) and that the species has been increasing in evolutionary time with no evidence for recent declines in abundance (18).

More systematic surveys at key times of the year (October through November) are needed to provide better data on distribution and abundance of the species. The limited data that are available do not suggest any current threats to the vitality of the species. The foraging habitats of Ross seals during the non-breeding season are still poorly known, but recent data (9, 11, 14) suggest that they are mesopelagic during much of the year in areas north of sea ice zones that overlap with foraging areas of southern elephant seals, at least.

Ross seals have never been hunted and there have been few scientific collections. The remote and dispersed distribution of Ross seals when breeding and molting appears to shelter them from substantive direct interactions with humans. Their apparently solitary behavior and broad distribution at other times might reduce the chance for direct interactions with commercial fishing activities, although expanded operations (particularly in the Ross Sea and elsewhere in the Southern Ocean), could have effects on populations of their mesopelagic squid and fish prey.

All Antarctic seals are included in the Convention for the Conservation of Antarctic Seals (CCAS). Article 4 of CCAS allows for special permits to be issued particularly for scientific research to take small numbers of all seals to collect information on life history and ecology of the species that might provide a basis for conservation and management within the framework of the Antarctic Treaty. Annex I of CCAS provides for commercial harvests of limited numbers of all species except Ross seals (Ommatophoca rossii) for which commercial catch or killing are prohibited by designating them as Protected Species. In 1991, the Ross seal was listed as a Specially Protected Species in Annex II of the Protocol on Environmental Protection to the Antarctic Treaty as a simple transfer from Annex A of the Agreed Measures for the Conservation of Antarctic Flora and Fauna of 1964. The Ross seal is classified by the IUCN as a species of Least Concern (21).

Convention on the Conservation of Antarctic Seals (CCAS)